UAE, Jordan and Iran among countries in Middle East that have partially lifted coronavirus lockdown restrictions. 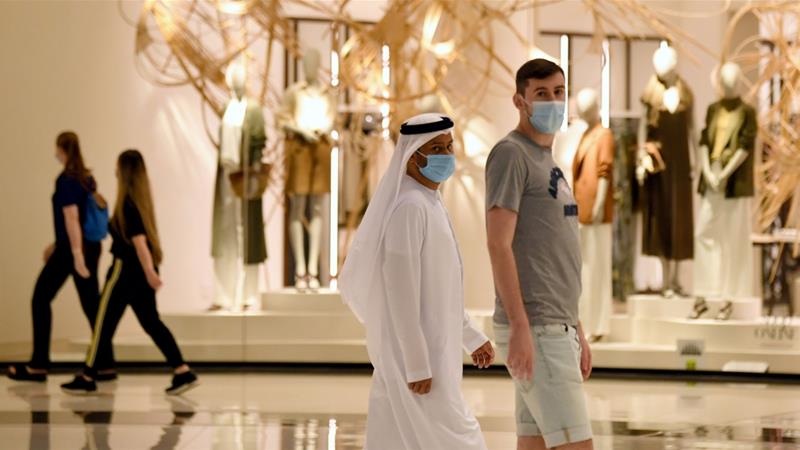 Many countries have started easing lockdown restrictions that were put in place to contain the spread of the novel coronavirus.

In the Middle East, several Gulf states have now relaxed their restrictions, including reopening malls with limited capacity.

Precautionary measures, such as wearing face masks and gloves while maintaining social distancing remain in place.

Iran – one of the worst-hit countries with more than 6,200 official deaths – announced it will reopen mosques in areas consistently free of the coronavirus.

On Sunday, President Hassan Rouhani said 132 counties, about one-third of the country’s administrative divisions, will “reopen their mosques as of tomorrow”.

“Social distancing is more important than collective prayer,” he continued, arguing that Islam considers safety obligatory, while praying in mosques is only “recommended”.

On Sunday, Jordan lifted all restrictions on economic activity in the latest easing of coronavirus lockdown rules to help jump-start the cash-strapped economy.

Minister of Industry and Trade Tariq Hammouri said businesses and industries would now be able to resume production.

Public transport will be allowed to return to normal service with safety guidelines. Universities and schools will remain closed and a night curfew will continue.

Bahrain has made it mandatory to wear masks outdoors after easing some restrictions at the start of the Muslim fasting month of Ramadan.

It had previously announced that shopping malls and some stores will reopen on April 9.

The following day, commercial establishments, including malls, salons and eateries reopened in Sharjah.

Commercial centres will operate from 12pm to 9pm local time, while food stores and pharmacies will work around the clock. Shoppers are required to wear face masks and gloves at all times.

According to state media agency WAM, members of the same family are allowed to travel in the same vehicle without getting fined for violating the three-people limit, Dubai police have said.

On April 26, Saudi authorities confirmed that wholesale and retail trade stores will be allowed to resume activities during the two-week period from April 29 until May 13, including inside shopping centres and malls.

Retail stores and shopping malls reopened last Wednesday on April 29 from 9am to 5pm local time.

On Monday, Lebanon allowed restaurants to open at 30 percent capacity during the day.

But many business owners say they will not reopen because they would be losing more money if they operate under such restrictions during a faltering economy.

Cafes have been ordered to stay shut until June, along with clubs and bars.

On Sunday, a partial reopening of schools took place in Israel for the first time in seven weeks.

According to the education ministry, 80 percent of schools in Israel reopened, but schools in Arab localities have not with some asking to delay the return until after Ramadan.