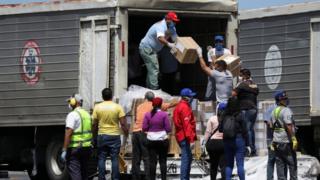 The US has offered to lift crippling sanctions against Venezuela if its leaders agree to a power-sharing deal.

Under the US plan, Venezuela’s left-wing President Nicolás Maduro would “step aside” and a transitional council would govern until fresh elections.

The US imposed its latest round of sweeping sanctions against Venezuela last year in an attempt to force Mr Maduro to step down.

However, Mr Maduro has so far resisted all attempts to remove him from power.

He is backed by Venezuela’s military as well as Russia, China and Cuba.

Less than a week ago, the US took a tougher line with President Maduro, charging him and other senior officials with “narco-terrorism”.

Venezuela has been mired in a political and economic crisis for years. Inflation hit 800,000% last year and 4.8 million people have fled the country.

Its problems have been exacerbated by a recent drop in world oil prices as well as the coronavirus pandemic.

Analysts say Washington now appears to have shifted its stance in a fresh effort to end the political impasse.

What is the US offering?

The proposal, laid out by US Secretary of State Mike Pompeo, echoes a statement issued over the weekend by Juan Guaidó, the country’s main opposition leader who is recognised as interim Venezuelan president by the US and about 60 other countries.

Mr Guaidó argues that a transitional government is urgently needed, especially given that the International Monetary Fund (IMF) turned down a $5bn (£4bn) loan request two weeks ago.

The IMF pointed to the fact that Mr Maduro’s legitimacy has not been recognised by the international community.

The US proposal bars both Mr Guaidó and Mr Maduro from sitting on the transitional council. Under the plan, elections would be held within a year.

Mr Pompeo said a “Democratic Transition Framework” for Venezuela would for the first time offer a “sequenced exit path” from US sanctions, including those hitting Venezuela’s vital oil sector.

Will Venezuela accept it?

It is unlikely. On Monday, Mr Maduro delivered a televised address where he threatened that “justice will reach everyone”, including “all the plotters”.

He has long blamed US sanctions for the dire state of its economy.

Moreover, the US wants all foreign military – including from Russia and Cuba – to leave Venezuela.

Last August, a fresh round of US sanctions ramped up pressure on President Maduro by not only targeting his government’s assets in the US but also the individuals, companies and countries doing business with his government.

State-run entities such as oil company PDVSA, Venezuela’s central bank and its development bank have all faced tough measures.

In a phone conversation with Russia’s Vladimir Putin on Monday, President Donald Trump said: “We all have an interest in seeing a democratic transition to end the ongoing crisis.”

Last week the US accused Mr Maduro and his aides of “narco-terrorism”, saying his country had flooded the US with cocaine to undermine the health of Americans.

A $15m (£12.5m) reward is being offered by the US for information leading to Mr Maduro’s arrest.