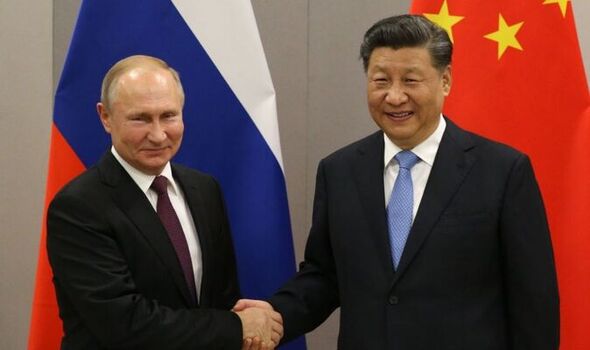 It is just one of the many fault lines at the heart of a new strategic partnership signed by Vladimir Putin and Xi Jinping.

The so-called comprehensive strategic partnership for co-ordination for a new era, which was accompanied by a 5,000-word declaration, saw Moscow and Beijing pledge mutual support over issues such as Nato expansion and Taiwanese independence.

But a closer look at their relationship reveals deep-set fragility and mistrust within an asymmetrical relationship in which Russia is very much the junior partner.

This, some experts argue, has already been shown in Mr Putin’s decision not to mount a further incursion into Ukraine before the end of the Winter Olympics in China.

Yesterday, China Foreign Minister Wang Yi said Ukraine should not be a frontline for competition among major powers. Speaking to a security conference, he said the sovereignty, independence and territorial integrity of any country should be respected and safeguarded.

China expert and former diplomat Matthew Henderson said: “This is a relationship of convenience, not an alliance.

“Neither Russia nor China have allies – they have partners. The rhetoric is strong. This marks the highest level of co-operation between the two countries since the 1950s.They are signalling a challenge to the existing world order in which they will co-ordinate as partners. But it’s not quite what it says on the tin.

“Russia is the junior partner and it is a suspicious and pragmatic one. It will push things as far as it can but knows exactly how little it can actually rely on Beijing.”

And the nightmare scenario, with the West fighting a war on two fronts as China uses this crisis to accelerate its plans over Taiwan, is also unlikely.

“The threat is certainly there,” said Dr Guo Yu, of the Sibylline strategic risk group.

“But I don’t see China altering its own agenda to take advantage of the Ukraine crisis. It will keep to its own timetable.”