Bitterly cold winds are predicted to sweep over the UK from a northwesterly direction when the bank holiday weekend arrives at the start of April, with temperatures as low as -3C. Temperatures are expected to plummet particularly in North West areas and Scotland. Central Scotland could shiver at -3C on Saturday, April 3, along with Liverpool and Manchester in the North West of England, according to WXCHARTS.

Southern regions and the northeast appear to average lows of 0C.

In a separate snow probability chart, most of Britain appears covered with swirls of dark blue and white on Easter Sunday (April 4), suggesting wintry cold air could sweep the nation, with a 10 to 40 percent chance of snow falling in these regions.

Brian Gaze, a forecaster at Weather Outlook, warned of “cold incursions” and snow hitting the UK towards the end of March and beginning of April.

His monthly forecast said: “Colder incursions become likely in the north and there is the possibility of sleet or snow at times, particularly over high ground. 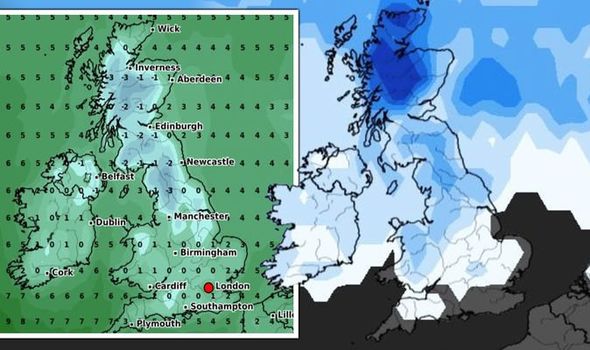 “Close to average temperatures are forecast when taken over the period as a whole and in the south during drier spells it may feel quite warm.

“Mixed weather is expected, with showers or longer outbreaks of rain spreading across the whole of the country on occasion.

“Despite that drier periods are likely too, particularly later on.” 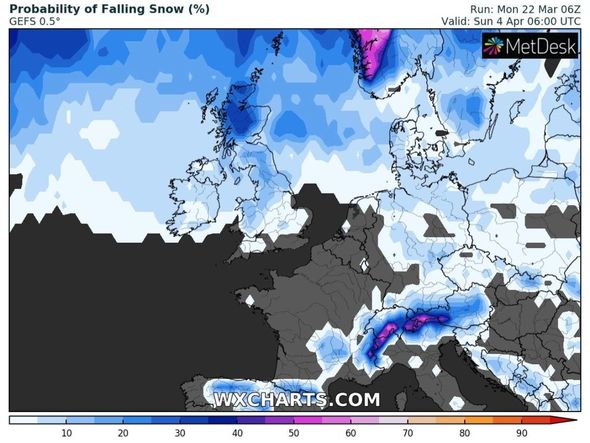 The forecast said: “For the final few days of March and start of April, including the Easter bank holiday weekend, the unsettled pattern is expected to continue.

“This is due to high-pressure building away to our southwest near the Azores and to the east from Turkey into Russia.

“As we are sat between these two high-pressure systems, lower pressure is expected for the UK and the storm track is likely to remain influential over Northwest Europe.

“This means it will likely continue to be wet and windy as weather fronts sweep in from the west or northwest. 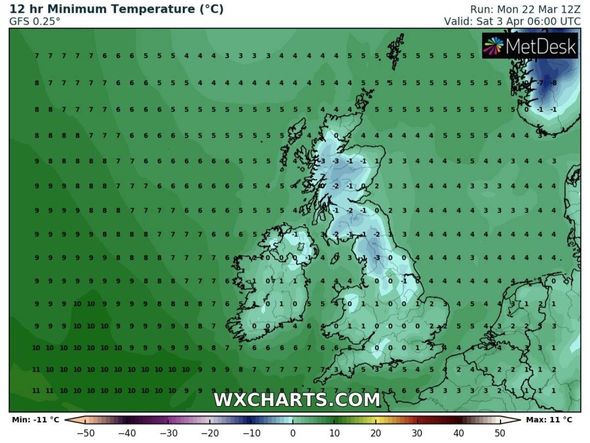 “As such, western and northern areas will bear the brunt of the weather.

“Southern and eastern areas will run a bit drier, although not completely dry.

“Temperatures will also continue to be fairly changeable, fluctuating around the seasonal average as fronts come and go. 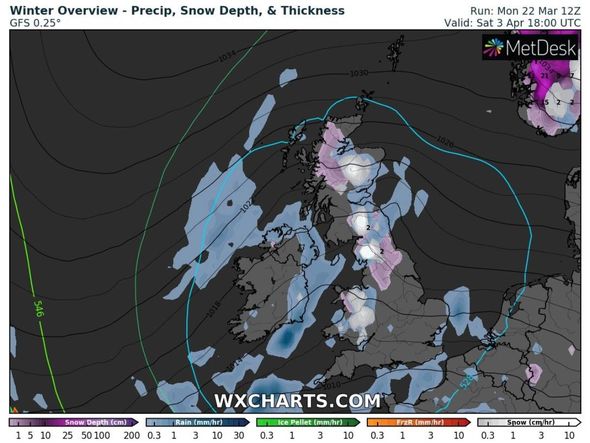 The forecast between Saturday, March 27 and Monday, April 5, said: “After a brief cold interlude on Friday, temperatures will recover on Saturday with further showers, wintry over high ground during the morning, and strong winds in northwestern areas.

“Elsewhere across the UK most areas becoming largely dry but often cloudy. Bands of rain are then likely to continue to move in from the northwest during this period, with the heaviest rain across northern and western parts of the UK. 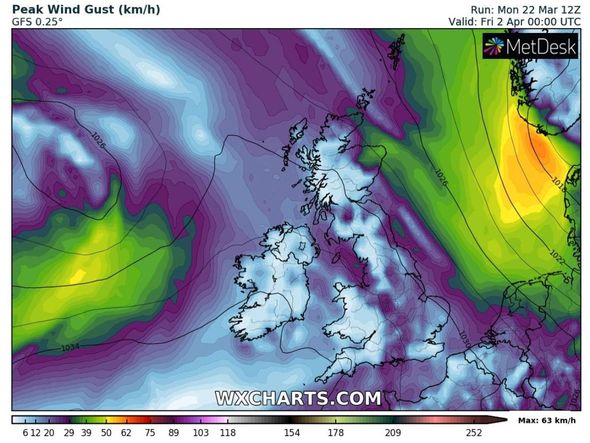 “The best of any settled weather will be in southeastern areas, though rain could reach here at times.

“The strongest winds are likely to be across far northern and northwestern areas, with winds possibly being from fresh to strong across other parts too.

“Temperatures are expected to be near to or a little above average, although short-lived cooler interludes could occur.”