The US governor who saw it coming early 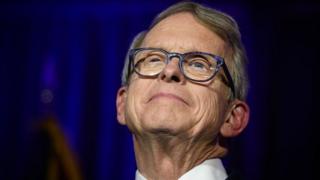 As the coronavirus outbreak barrels throughout the US, states have scrambled to get ahead of its spread, often after weeks of inaction. But one governor imposed sweeping measures days before a single case had been reported in his state.

His announcements are peppered with “thank yous” and mild “just-a-reminders”, encouraging continued social distancing. He holds printed notes, shuffling the papers occasionally, staring down at them frequently. He doesn’t speak in platitudes, but in detail, taking time to dictate every letter and character in the state’s coronavirus web address.

It’s a stark contrast from his New York counterpart Andrew Cuomo, whose own daily briefings have become a staple of the US coronavirus news cycle.

But while the lesser known Mr DeWine, 73, may lack the media attention of Mr Cuomo, he is drawing praise for his early moves against the virus, at a time when much of the US was still playing catch up.

On 5 March, after resistance from organisers, Mr DeWine got a court order to shut down much of the Arnold Sports Festival – an annual event featuring 20,000 athletes from 80 countries, around 60,000 spectators each day, and an expected $53m for Columbus, the state’s largest city.

The state had yet to report a single case.

“This is a balancing test,” the first-term governor said at the time, in response to criticism.

Over the next three weeks, Mr DeWine moved to bar spectators from major sporting events – days before US professional leagues decided to cancel their seasons. He was first in the nation to declare a state-wide school shutdown. He invoked an emergency public health order to postpone Ohio’s presidential primary the night before it was scheduled on 17 March.

At the time, critics dismissed Mr DeWine’s strict regulations as overblown, largely out of step with Ohio’s neighbouring states. And in terms of policy, the governor’s approach put him at odds with fellow Republican Donald Trump, who until mid-March downplayed the threat of the virus, saying it would “go away”.

To plot his approach Mr DeWine has, by all accounts, relied heavily on Dr Acton – the last cabinet member selected by the governor when he took office last year. The selection of Dr Acton marked a change for the department – neither of her two predecessors were medical doctors.

“Mistakes that I have made throughout my career have generally been because I didn’t have enough facts, I didn’t dig deep enough,” Mr DeWine said. “So, I made up my mind I was going to have the best information, the best data available.”

In his daily briefings, Mr DeWine is quick to defer to Dr Acton for specific questions on the virus and its spread, reminding Ohioans that the state’s decisions are driven by science.

These policies are “keeping us safer” he said on Tuesday. “We’ve got to stay at it.”

For his job today, Mr DeWine has the benefit of experience. In his nearly 30-year political career, he has held almost every public officer on the way to governor, serving as county prosecutor, state attorney general, and in both the US House and Senate.

He will need all that experience to confront a dire economic picture. Last week, Ohio reported 187,780 jobless claims – the second highest nationwide and almost half the total claims from all of last year.

“We’ve made difficult decisions but we have to get through this,” he said of the job losses on Tuesday. “We can’t let this monster come up, we need to keep pushing it down.”

Still, while Ohio’s infection numbers are rising, it has so far managed to avoid the surges seen in states like New York, Washington, and Louisiana, ranking 15th nationwide in terms of reported cases.

And Mr DeWine has stayed resolute.

“It has to be the type of response you take in war time because we have been invaded, literally.