North has stepped up military drills since Kim Jong Un started the new year promising to boost its nuclear deterrence. 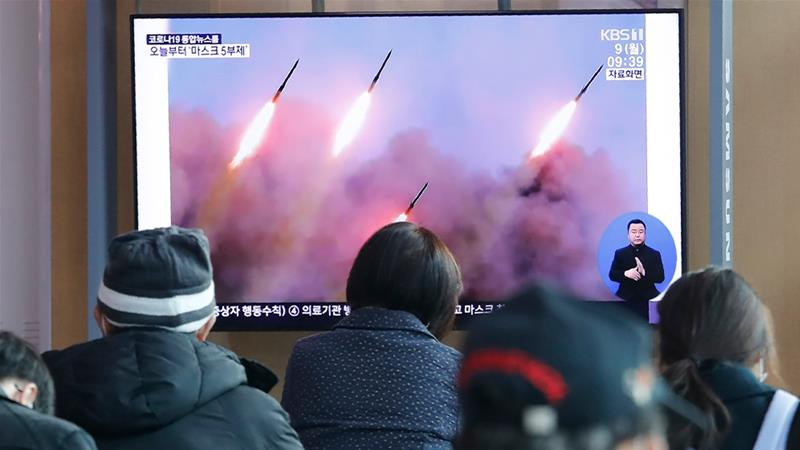 North Korea fired three unidentified projectiles off its east coast on Monday, South Korea’s military said, two days after the North threatened to take “momentous” action in protest at outside condemnation over its earlier live-fire exercises.

Seoul’s Joint Chiefs of Staff said in a statement three launches took place from an eastern coastal town in the North’s South Hamgyong province. The projectiles flew for 200 kilometres (124 miles) at a height of 50 (31 miles) km.

“The military is monitoring for additional launches and maintaining readiness,” it added.

A spokesman at Japan’s defence ministry said North Korea launched what appeared to be “ballistic missile(s)”, adding there had been no indication of anything coming down in Tokyo’s territory or exclusive economic zone.

“These actions threaten the peace and security of our nation and region,” said Yoshihide Suga, Japan’s Chief Cabinet Secretary and top government spokesman.

“Considering the repeated launches of ballistic missiles up to now, it is a serious issue affecting the international community, including Japan.”

In the past 10 days, North Korea has said leader Kim Jong Un supervised two rounds of live-fire artillery exercises in its first weapons tests since late November. Kim had entered the new year with a promise to bolster his nuclear deterrent and not to be bound by a major weapons test moratorium amid diplomatic deadlock aimed at convincing Kim to abandon his nuclear programme.

Vipin Narang of the Massachusetts Institute of Technology added: “Kim continues to test, improve and operationalise his force.”

North Korea has lashed out at the outside criticism, saying it has the right to conduct military drills in the face of United States and South Korean forces on its doorstep.

The Security Council did not issue any statement after discussing North Korea’s March 1 launches last week, but five European members condemned what they called “provocative actions.”

Belgium, Estonia, France, Germany and the United Kingdom, which called for the closed-door meeting, said in a joint statement afterwards that the tests undermine regional and international peace, security and stability and violate unanimous Security Council resolutions.

The North’s Foreign Ministry on Saturday accused the five European countries of “repeating an absurd argument of condemnation and violation resolutions of the United Nations whenever we conducted military drills.”

“The illogical thinking and sophism of these countries are just gradually bearing a close resemblance to the US which is hostile to us,” a ministry statement said. “The reckless behaviour of these countries instigated by the US will become a fuse that will trigger yet another momentous reaction.”

Some experts say North Korea may intend to catch South Korea off balance before seeking help in reviving its struggling economy, since the US has said sanctions will remain in place unless it takes significant steps towards denuclearisation.

Nuclear talks between Pyongyang and Washington remain stalled since the collapse of the second summit between Kim and President Donald Trump in Hanoi early last year.

Pyongyang set Washington a unilateral deadline of the end of 2019 to offer it fresh concessions on sanctions relief and at a party meeting in late December Kim declared the North no longer considered itself bound by its moratoriums on nuclear and intercontinental ballistic missile tests.

He also threatened a demonstration of a “new strategic weapon” soon.