Modi to hand over social media accounts for Women's Day

Feminists accuse India PM of publicity stunt after he decides to hand over social media accounts to ‘inspiring’ women. 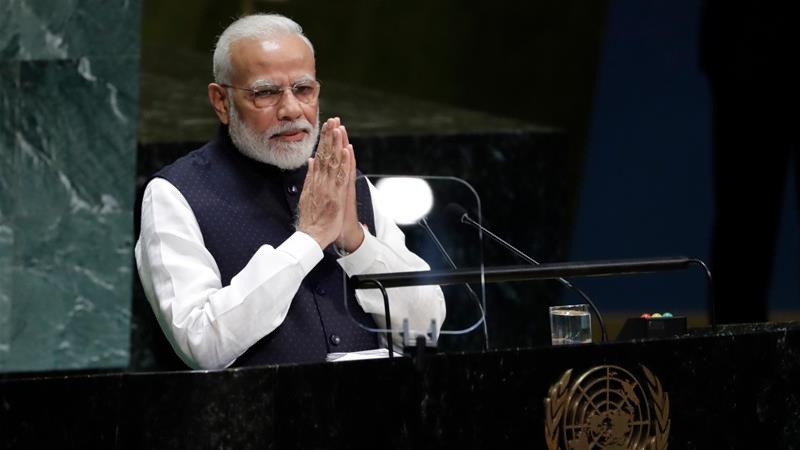 Indian Prime Minister Narendra Modi has been accused of publicity stunt after the Hindu nationalist leader announced he will hand over his social media accounts to “inspiring” women on International Women’s Day on Sunday.

“This Women’s Day, I will give away my social media accounts to women whose life and work inspire us. This will help them ignite motivation in millions,” Modi, who has a combined following of 130 million on major social media platforms, wrote on Twitter.

“Are you such a woman or do you know such inspiring women. Share such stories using #SheInspiresUS?” The hashtag trended briefly after the 69-year-old leader, who has more than 55 million Twitter followers, posted it on the micro-blogging site.

Activists and feminists said the move was a “distraction” from the recent deadly violence in the capital, New Delhi.

At least 47 people, mostly Muslims, were killed in religious violence last week. The police, controlled by the government of Prime Minister Modi rather than the state government in Delhi, has been criticised for doing little to prevent the violence and many times accused of siding with the Hindu mob.

Modi called for calm in a Twitter post but has not spoken on the deadly violence in public gatherings.

Kavita Krishnan, secretary of the All India Progressive Women’s Association

“Such a gimmick is an attempt by Modi to make himself the story again – at a time when it is his government’s complicity in a communal pogrom and in draconian citizenship laws that is the story,” said Kavita Krishnan, secretary of the All India Progressive Women’s Association.

“Will the woman who takes over his account finally unfollow the accounts that regularly make rape and death threats, and vile communal hashtags?”

Many social media handles that follow Modi have been accused of issuing death and rape threats to opponents and feminists in the past.

Rana Ayyub, a columnist with The Washington Post newspaper, suggested that Modi should hand over his Twitter handle to Zakia Jafri, whose husband Ehsan Jafri was among 69 killed in a housing society in Modi’s home state of Gujarat in 2002. Modi was the chief minister of the state when the violence killed more than 1,000 people, mostly Muslims.

“I have fought patriarchy my entire life. In my family and outside it. The last thing I want is to be patronised and told that you are gifting me your social media account,” she wrote referring to Modi’s offer to hand over his social media handles on Twitter, Facebook, Instagram and YouTube to women.

Since coming to power in 2014, Modi launched a number of programmes for women safety and their empowerment, but violence against women remains a reality in the country.

“The PM is doing what he and his party is good at, doing publicity and no work. Look at the Beti Bachao Beti Padhao campaign, most of the money has been spent on publicity and advertising,” feminist Vani Subramanian told Al Jazeera.

His support for the March 8 event came after he faced criticism for failing to check violence against women following a series of rape cases late last year that triggered mass protests.

In November, a 27-year-old vet was raped, suffocated and her body set alight on the outskirts of the southern city of Hyderabad.

Another rape victim was set on fire and killed by a gang of men, including her alleged rapists, in December.

In the same month, a court sentenced a former legislator from Modi’s Bharatiya Janata Party to life imprisonment for raping a teenager.

Many BJP leaders supported former minister and BJP leader Swami Chinmayanand after he was arrested in an alleged rape case. He was granted bail by a court in northern Uttar Pradesh state earlier this month.

These cases highlight India’s grim record of sexual violence against women despite enacting some of the world’s toughest laws after the gang rape of a Delhi student on a bus in December 2012, which sparked global outrage.

One woman reported a rape every 15 minutes on average in India in 2018, according to government data released in January.

The governing party leaders have also attacked female protesters staging sit-ins across the country against a new citizenship law that fast-tracks citizenship of minorities from neighbouring countries except Muslims.

Despite repeated attempts by Al Jazeera, BJP spokespersons could not be reached for comment.