January is continuing with even more appalling weather as the Met Office issues a slew of amber and yellow weather warnings as Storm Christoph heads for Britain. Up to 70mm of rain is expected in some areas, whereas others are expecting snow and ice.

“Danger to life” could be caused by flooding, severe gales and melting snow as newly named Storm Christoph heads our way.

The Met Office has weather warnings out, including one amber warning, for Tuesday, Wednesday and Thursday, covering almost all of the UK at some points.

The amber warning covers the centre of the country, from Lancashire down to Peterborough.

It reads: “Rain developing during Monday persists into Wednesday and Thursday, this rain associated with Storm Christoph. 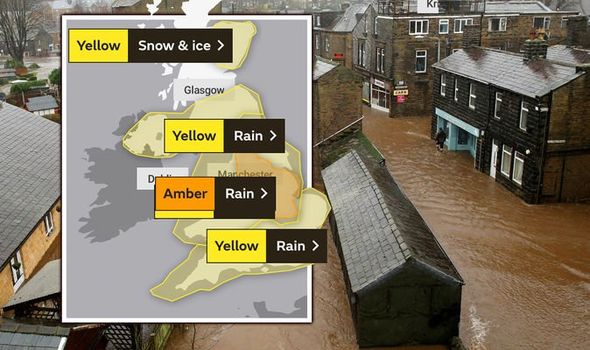 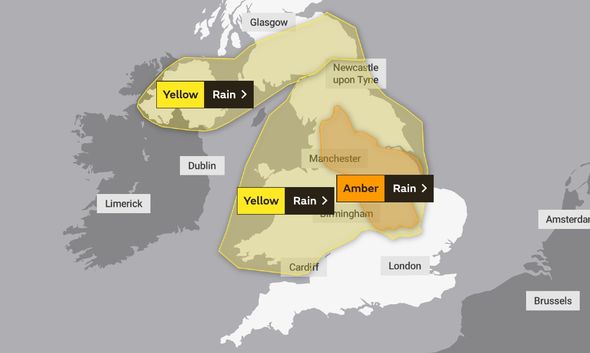 “Rain will be heaviest and most persistent across western facing hills.

“The rain will also lead to rapid melting of any remaining lying snow across the higher peaks adding to water entering the river network.

“Strong winds will accompany the rain at times and may add to travelling difficulties across higher and more exposed routes.” 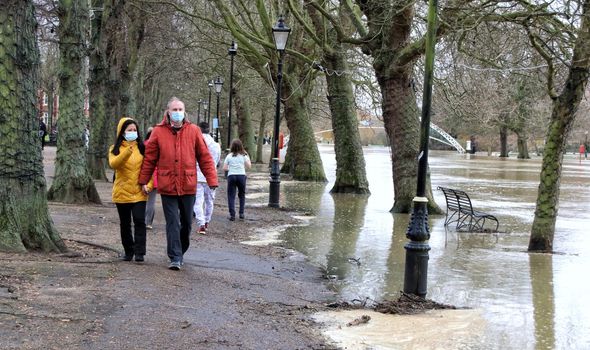 Environment agencies are warning of rivers bursting and surface water causing floods for northern England and parts of Wales on Tuesday.

Public transport is expected to be disrupted or cancelled and travelling is not encouraged.

The Met Office has said: Heavy rainfall combined with some snowmelt across the hills is likely to lead to some flooding.”

The risk expands more widely across England over Wednesday and Thursday.

Elsewhere, Scotland has a yellow warning out for snow in the Highlands and across Aberdeenshire

Low pressure has built over the North Sea which is expected to cause gales along the east of the country, with England being the worst-hit area as we head into Wednesday and Thursday.

Manchester, Leeds and Sheffield are expected to be the worst hit with rain, with downpours expected to continue until Thursday according to the amber weather warning.

Katharine Smith, the flood duty manager at the Environment Agency, said: “Heavy and persistent rain falling on already saturated ground with snowmelt in parts of northern, central and eastern England is expected to bring significant river and surface water flooding, and could cause damage to buildings in some communities. 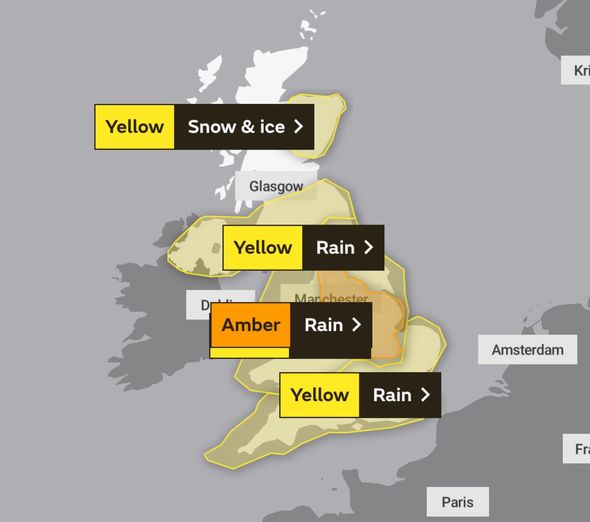 “Flooding could continue to affect parts of central, eastern and northern England into Friday, with localised flooding of land and roads a possibility elsewhere across much of [the] country on Wednesday and Thursday.”

Dan Suri, a meteorologist, said: “As the system moves away into the North Sea on Wednesday night and Thursday morning, there will be strong winds along the east coast for a time.

“Meanwhile, colder air coming southwards into the weather system brings the risk of further snow on the back edge of this system.

“Temperatures will gradually fall across the UK through the end of the week and into the weekend, bringing a return to widespread overnight frosts.”

Met Office spokesperson Nicola Maxey said: “It’s a very unsettled period as we go through the week until Friday where we see colder air from the North pushing away the low pressure, so we expect a fine cold day on Friday.”