Met Office warnings UPDATED: Up to three inches of rain to fall in a day – Flood threat

The Met Office has issued yellow rain warnings for parts of Scotland on Saturday. The weather warning is in place from 6am until 11.59pm, and the Met Office is warning of “heavy rain” and “snow melt” which could cause travel disruption and flooding. 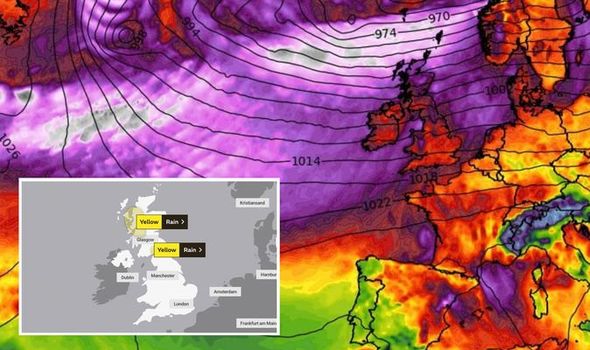 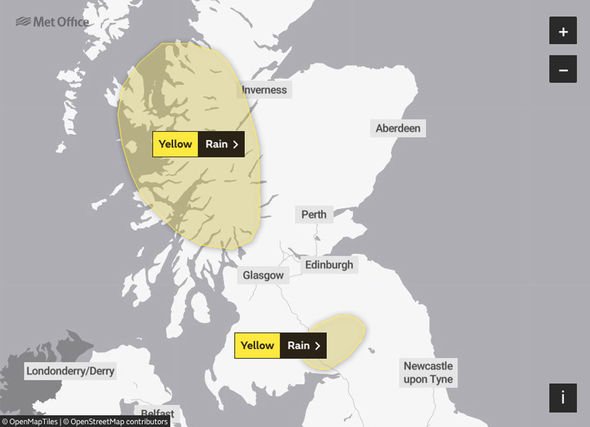 The warning covers a stretch of northern and western Scotland, including Fort William, Portree and Tobermory.

Another area of southern Scotland, covering areas such as Moffat and Lockerbie, is also under the yellow rain warning.

The Met Office warn as much as three inches (70mm) of rain could fall over some areas this weekend.

The warning reads: “Outbreaks of rain will become persistent and occasionally heavy through Saturday across much of Western Scotland and parts of Southern Scotland.

“This, in combination with a partial thaw of lying snow is likely to lead to some flooding in a few places.

“Rain will clear southeastwards through Saturday evening to be replaced by scattered showers. 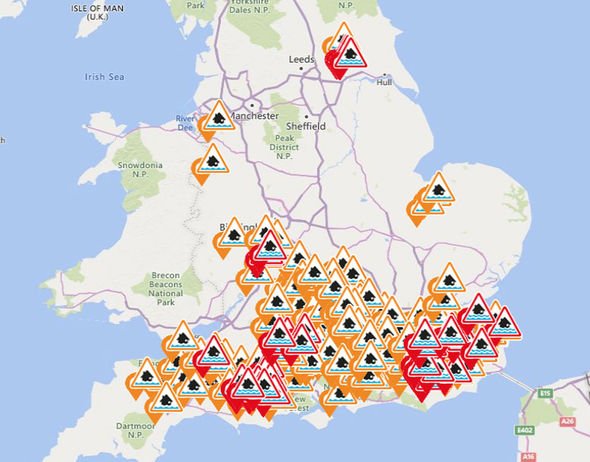 The UK has recently witnessed the arrival of three named storms which brought devastating flooding to some regions: Storm Ciara, Storm Dennis and Storm Jorge.

This February was the wettest February on record, and provisional Met Office statistics showed the UK was drenched by 209.1mm of rainfall.

Further rainfall is forecast for parts of the UK over the coming days, which could “cause some extra problems”.

Met Office weatherman Alex Deakin said: “Any extra rain falling after such a wet February could cause some extra problems.

“There will be more rain this weekend particularly in the west on Saturday.

“That rain is likely to pep up on Saturday night and its also going to turn windy during the day and night on Saturday.”

In addition to some Met Office weather warnings, more than 100 flood warnings and alerts have been issued across the UK today.

There are currently 42 flood warnings in place, meaning flooding is expected and immediate action is required. 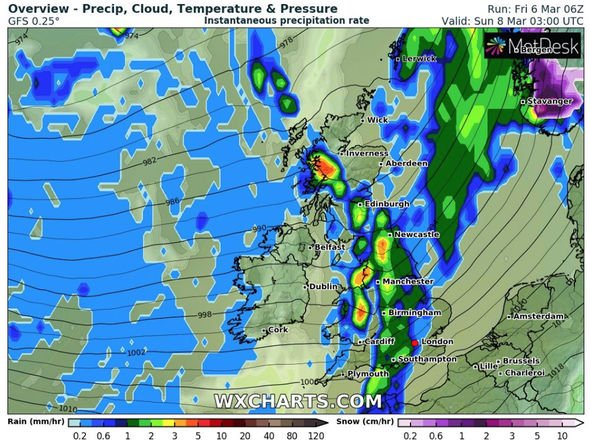 “A few fog patches at first across England and Wales.

“Many places dry with some sunshine and feeling a little milder than yesterday after a cold start. Scattered showers in west.”

“Mainly dry with clearer skies across many central and eastern parts of the UK.

“Cloud increasing in the west with outbreaks of rain and drizzle later.”

“Rather cloudy with outbreaks of rain, this heavy and persistent over western hills.

Outlook for Sunday to Tuesday:

“Early rain clearing to sunshine and showers on Sunday, before further spells of wet and windy weather arrive for most through Monday.

“Windy with temperatures mainly near the seasonal average.”