Italy shuts down more industries, but critics say it's not enough

A new decree aims to help stem coronavirus infection after the death toll jumped by almost 800 in one day. 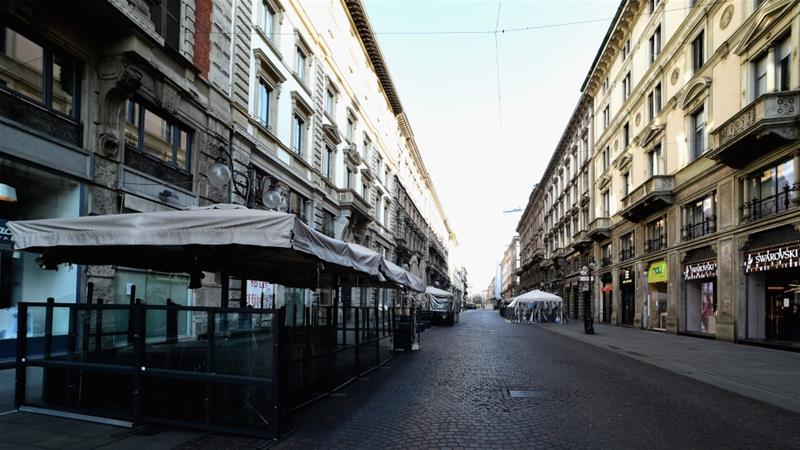 Rome, Italy – As the coronavirus continues to spread in Italy, many of the country’s industries are being shut down.

The businesses that are the latest to be affected include car and clothing manufacturers, rental services, real estate construction and tourism companies.

“We are slowing down the country’s engine,” President Giuseppe Conte said in a Facebook message on Saturday night.

“It’s a hard decision, but it prepares us to face the most acute phase of the infection.”

Italy, the European epicentre of the pandemic, is the world’s most affected country at the moment, in terms of deaths and a rising number of infections.

Conte’s decree was signed on Sunday, a day after Italy posted a world record coronavirus death toll – with 793 people dying in 24 hours.

The shutdown began on Monday and will remain in place until April 3; companies have been given until Wednesday to adopt the directive.

If they fail to do so, authorities will forcibly close their activities for 30 days.

But critics have said the list of 80 sectors that are exempt is too long.

Essential public services such as transport will continue.

“We are moderately satisfied because it established a principle, but the decree leaves too many open windows,” Andrea Agazzi, general secretary of the Federation of Metallurgical Workers (FIOM) of the city of Bergamo, told Al Jazeera.

Piled up pressure from local mayors

The new measures came after regional political leaders in Lombardy, where the virus has taken hold forcefully, called for stricter regulation in their areas.

“The recent data requires us to act as soon as possible: we can reverse an ever worrying tide only with a further action restricting all personal contacts,” said Lombardy Governor Attilio Fontana.

As of March 17, 40 percent of commuters in the northern region were still on the move, Deputy Governor Fabrizio Sala said.

“This is not enough to contain the virus,” he told reporters.

Even before Conte’s announcement, Governor Fontana had on Saturday already promoted a new rigid set of regulations over the region.

In Lombardy, all building companies that are not involved in the construction of healthcare facilities must suspend work.

The regional regulations also require the shift to teleworking for all professional activities usually carried out in private offices.

The province of Bergamo in Lombardy is one of Italy’s leading industrial hubs.

But, with more than 6,400 people infected, it has also become the hotbed of the virus.

Agazzi said most local businesses have either turned their engines off or are running at reduced capacity since unions and business owners reached an agreement on March 14 with the government over the compulsory safety measures for all workplaces.

But that was not enough to stop the spread of infection, so he believes that the lockdown should be stricter.

“I almost find it hard to understand what is banned by this decree,” Agazzi said.

All major unions share Agazzi’s view and have threatened to go on strike if nonessential lines of production remain open.

“In an emergency like this, a government is required to take hard decisions, and it’s hard to imagine that anybody can come up with a detailed and precise procedure for everyone in just one day,” Alfonso Gambardella, professor of management at Bocconi University, told Al Jazeera.

“The government has given some indication; now we need to react and self-rule our companies with responsibility,” he said.

Concerns have been rising over the economic impact of the shutdown. According to the General Confederation of Italian Industry (Confindustria), Italy will lose 100 billion euros ($108bn) a month.

On March 16, the government approved a 25 billion euro ($27bn) package to ease the economic downturn.

The decree temporarily banned any employee dismissals, as well as a partial tax suspension for March and April, alongside the extension of unemployment insurance, subsidies for the self-employed and liquidity assistance from the state lender, Cassa Depositi e Prestiti.

But Gambardella believes that the country still needs more support.

“If we don’t inject some liquidity,” Gambardella said, “we will face a permanent setback instead of a temporary one.”