France is battling to control wildfires tearing through the country as thousands of hectares are devastated by the blaze. Shocking video footage has captured brave emergency workers grappling to subdue the flames in the Gironde region of southern France.

Huge fires have rippled across the nation fuelled by soaring temperatures as Europe boils under an intense heatwave.

Since the outbreak of the blaze, tens of thousands of people have been forced to evacuate their homes as firefighters have worked day and night in a desperate bid to bring the flames under control.

An estimated 14,000 people have been evacuated from Gironde as more than 1,200 firefighters have continued to tackle the blaze

The local authorities confirmed access to the region had been “temporarily blocked” while emergency services attempted to limit the spread of the flames.

Local official Vincent Ferrier warned: “We have a fire that will continue to spread as long as it is not stabilised.”

Temperatures are expected to climb above 40 degree celsius in France, further complicating efforts to extinguish the devastating wildfires. 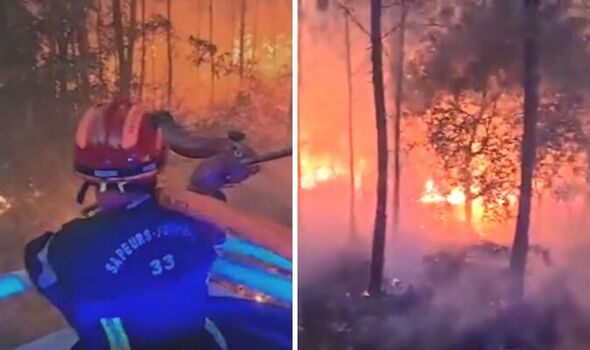 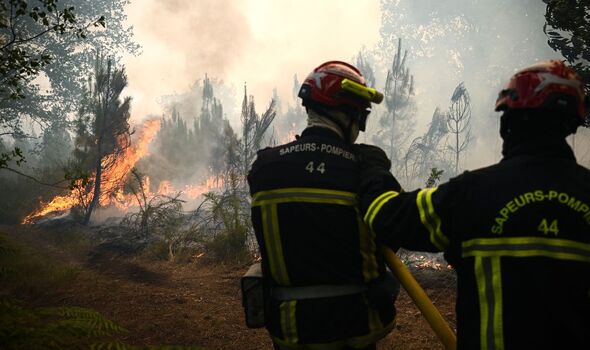 He praised the efforts of emergency services as he said: “Our firefighters are fighting the flames with remarkable courage.”

In a statement on Twitter, the Minister thanked the authorities and the work of the military in preventing the further spread of the blaze across southern France.

He said: “The fight against the Landiras forest fire, a 5km long and 40 metre wide firewall is being built in an attempt to stop the progression of the fire.” 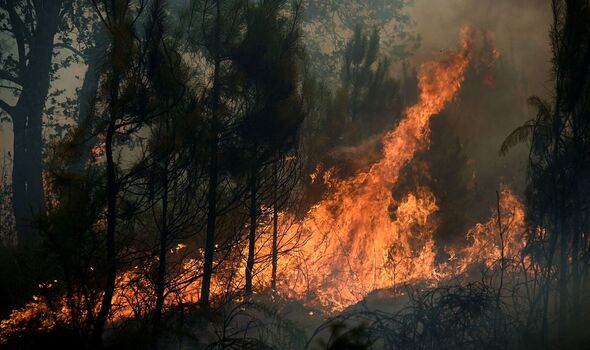 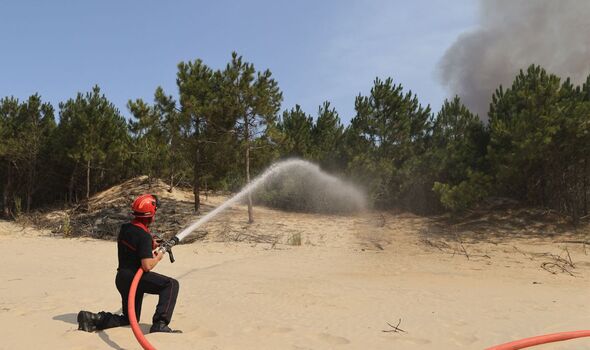 The blistering heat has hampered efforts to fight the flames tearing through Gironde as the dry weather has parched the pine forests, leaving them to become a thick wall of fire.

France is not alone in the struggle against dangerous wildfires as thousands more have also been forced to evacuate to safety as fires burned across Spain, Croatia and Greece.

Portugal also faced outbreaks of wildfires but, as of Monday, the flames are reportedly under control as the heatwave continues. 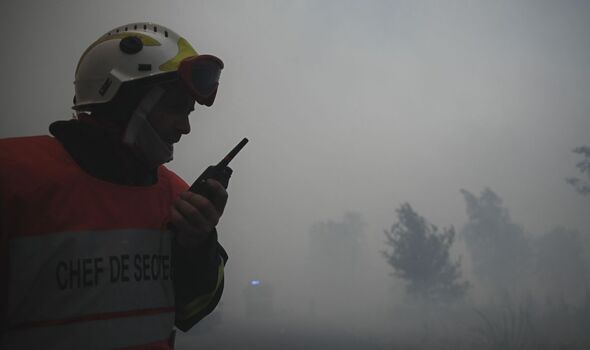 In the UK, a red warning for extreme heat has been issued as the forecast suggests temperatures are set to rise up to 41 degree celsius.

The warning highlights the conditions constitute a “danger to life” if the necessary precautions are not taken.

The population has been warned to expect delays across rail networks and roads as the heat is expected to compromise the travel system across the UK.

In addition, people have been warned by the Met Office that “substantial changes in working practices and daily routines will be required,” as the nation enters a historic heatwave.

Read next:
Blistering Britain and the places most likely to hit SWELTERING 40C
Expert warns of SEVERE thunder and lightning after extreme heat
Where exactly were apocalyptic hellfires Met Office? PAUL BALDWIN
Andrew Neil sends horror warning over Europe freezing this winter
Heatwaves may become a regular event due to climate crisis