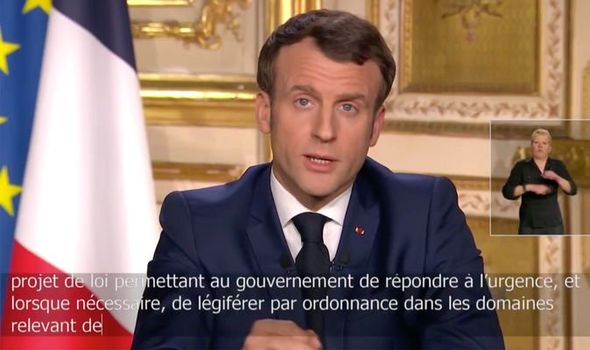 French media suggested authorities were set to impose draconian restrictions on movement from Wednesday this week, quoting two reliable sources close to government. The strict measures will involve a prohibition on all movements outside the home except for one shopping trip each day. The sources said police and the army will be mobilised to enforce the rules and a curfew will be imposed from 6pm. They said the lockdown will last a minimum of five weeks.

Mr Macron is scheduled to make a live televised address to the nation at 7pm as speculation mounts that France is considering new measures to deal with the coronavirus outbreak.

He is due to convene a top-level government meeting on the issue prior to the broadcast.

The number of deaths from the coronavirus in France increased by more than a third to 127 and more than 5,423 have been infected.

He hit out after Germany decided to temporarily introduce border controls on frontiers with Austria, Switzerland, France, Luxembourg and Denmark from today in an attempt to curb the spread of coronavirus.