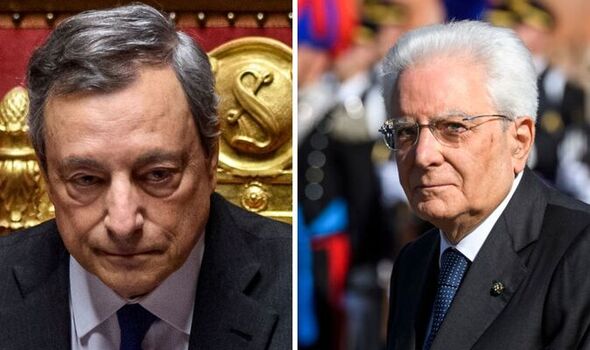 Dubbed Super Mario for his handling of the eurozone crisis as head of the European Central Bank, he first tendered his resignation a week ago when a populist party — the Five Star Movement — in his broad-based coalition government refused to back an economic package for businesses and families.

President Mattarella had asked him to stay in the post until the planned end of the legislature in early 2023 and, after days of silence, Mr Draghi said he would continue if the political parties were prepared to back a strong, cohesive government.

But that was not the case, with things crumbling on Wednesday when three of his main partners — Silvio Berlusconi’s Forza Italia, Matteo Salvini’s anti-immigrant League and, again, the Five Star Movement — snubbed a confidence vote he had called to try to end divisions and renew their fragile alliance.

Mr Draghi, 74, was a popular choice as Prime Minister. He took office in 2021, as Italy wrestled with the coronavirus pandemic and an ailing economy.

The Milan stock market fell for the second day in a row on Thursday. Another key indicator closely watched in Italy, called the spread, soared nine percent. It represents the gap between Italian and German 10-year bonds.

President Mattarella said the government would remain in office to handle current affairs and then dissolved both houses of parliament.

Italians were due to go to the polls in the first half of next year but will now take place within the next 70 days.