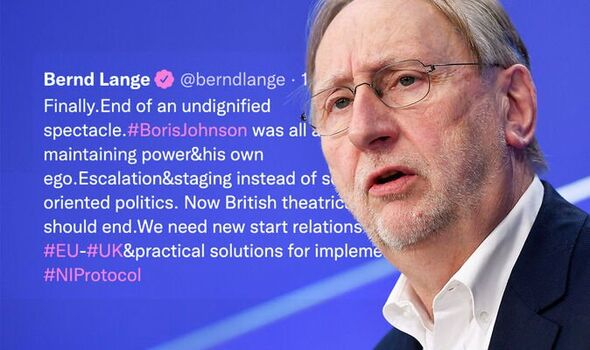 Bernd Lange took to Twitter to launch a furious attack against Mr Johnson as the Prime Minister prepares to cave to huge pressure and resign. He wrote: “Finally. End of an undignified spectacle. It was #BorisJohnson only about maintaining power and one’s own ego. Staging + escalation instead of solution-oriented politics. Enough of the British theater thunder. We need a fresh start Relationships #EU – #UK & practical solutions for the implementation of the NI protocol.”

Mr Johnson is quitting following a mass exodus of ministers and MPs who have made clear his position is untenable.

He will remain as Prime Minister until a successor is in place, which could happen before the Conservative Party conference in October.

The Prime Minister reportedly spoke to Sir Graham Brady, chairman of the Conservative 1922 Committee, to inform him of his decision.

A No 10 source said: “The Prime Minister has spoken to Graham Brady and agreed to stand down in time for a new leader to be in place by the conference in October.”

Mr Johnson will make a statement in the House of Commons later today to confirm the decision.