However, Spanish authorities now suspect the latest wildfire was an arson attack. The fire began on Wednesday in Galicia, Spain and has quickly advanced over the north-west region.

José González, Galician Minister of Rural Affairs, has said there are evidence and witness reports to suggest someone intentionally caused the wildfire.

In the early evening of Wednesday, reports of fire breaking out happened at the exact same time.

Mr González said: “Up to 10 sources have been detected in different places.

“What this proves is that it was a car moving and starting the fires.”

He has urged the local community to come together in order to “stop these heartless people”. 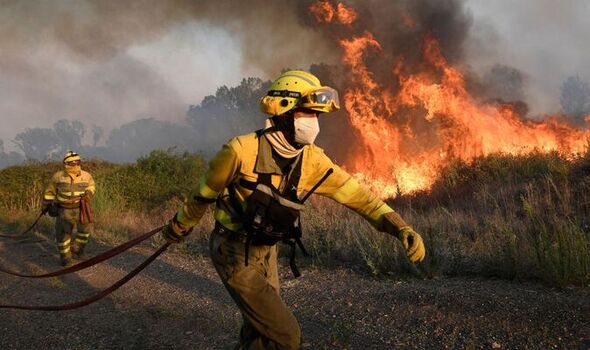 Firefighters attempted to battle the blazes, but extremely dry grass and forests due to the heat have left the area perfect kindling for a break-out fire.

Helicopters are currently being deployed to try and fight the flames.

The hot temperatures and sudden change in the wind have made containing the wildfire extremely difficult.

Local mayor Gerardo Seoane has said the area has been burned with “a strategic intention.”

Mr Saoane has said the town of Verin has been forced to evacuate several homes in the area.

The fire burning near Verin has been trending on social media due to photos of huge smoke clouds and burned-down woodland.

One firefighter said: “Craziness! It looks like a volcano!” and said the fire was “clearly intentional”. 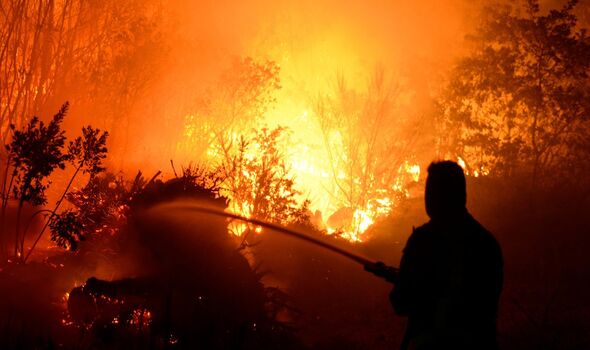 This summer, Spain has dealt with a record-breaking number of wildfires.

The fires have led to hundreds of deaths across Europe and thousands more people forced to evacuate their homes.

According to the European Union’s Atmosphere Monitoring Service, Spain has produced more carbon emissions in the last two months than it usually does in an entire year.

Wildfires in Spain alone have caused 1.3million tonnes of carbon emission in June and July, the highest amount since records began 19 years ago.