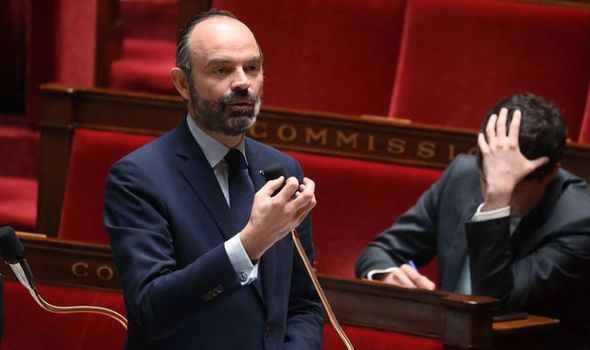 M Philippe told TF1 television: “A lot of citizens want normalcy to return, but it’s not happening soon. We feel the lockdown measures that we have taken, and which we will toughen yet again could last several weeks.”

France’s full-scale lockdown, which came into effect last Tuesday at noon, was originally believed to last around 15 days. It currently has no end date.

As of this Tuesday, French citizens are only allowed to exercise outdoors once a day, within 1 kilometre of their home and for a maximum of one hour, the conservative premier said. All exercise must be solitary.

Gatherings with family or friends are banned, but burial ceremonies can go ahead so long as they are restricted to 20 people.

Open-air markets should close, he added, unless they are essential to the local community.

The latest round of restrictions on French public life came as the death toll rose by 28 percent in 24 hours to 860, and the number of sick needing life support jumped 19 percent to 2,082.

The total number of confirmed coronavirus infections also increased on Monday to 19,856, from 16,081 on Sunday, according to the Health Ministry.

As France’s healthcare system – an object of national pride – comes under severe strain, M Philippe refused to impose a nationwide curfew but did not rule out localised ones.

He insisted: “We do not want to put a national curfew in place. But we told prefects to get in touch with mayors who deem (a curfew) necessary.

“And we will not hesitate, where necessary, to take tougher measures, meaning curfew measures.”

Several curfews are already in place, including in the Riviera town of Nice and the hard-hit eastern town of Mulhouse.

M Philippe also echoed Health Minister Olivier Véran’s statement that the anti-malaria drug hydroxychloroquine – hailed as a miracle cure by some and a toxic drug by others – would not be put on the market for mass use against the coronavirus until more testing had been done.

Earlier Monday, M Véran said that in the absence of any conclusive data, he would be issuing an order to “regulate the use of hydroxychloroquine outside the traditional marketing authorisations, which will therefore be accessible to hospital medical teams who wish to use it.”

But he stressed the anti-malarial should only be used to treat severe cases of the disease and “under strict medical supervision”.

M Véran told a daily press briefing: “The situation [in France] is difficult, but we are not losing hope.”

There are as yet no vaccines or treatments approved but trials are underway in the United States and Europe to see whether hydroxychloroquine can prevent, or reduce, the severity of the flu-like illness.

French hospitals began testing the anti-malarial and three other drugs on Sunday as part of a European programme involving 3,200 coronavirus patients.