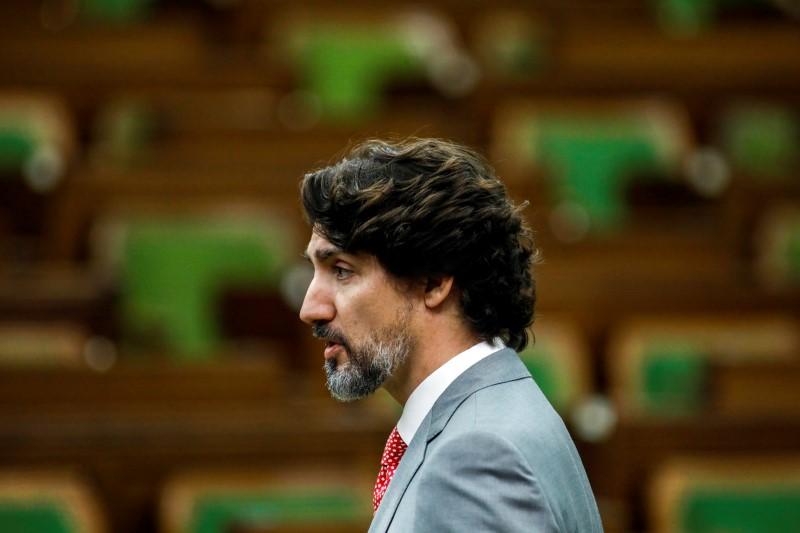 OTTAWA (Reuters) – Canadian Liberal Prime Minister Justin Trudeau and his rivals in the opposition vowed on Monday to fight racism at home as violent protests continued in the United States following the death of a black man in police custody in Minneapolis last week.

Thousands staged a peaceful protest on Saturday in Toronto to demand answers in the death of Regis Korchinski-Paquet, a 29-year-old black woman who fell from her 24th-floor apartment balcony last week while police were present.

Vancouver and other Canadian cities also held peaceful protests over the weekend, but tensions flared after a march in Montreal on Sunday when protesters smashed windows and set fires.

Trudeau addressed “young black Canadians” during his daily news conference, saying: “I want you to know that I am listening and that your government will always stand with you. Together, we will keep taking meaningful action to fight racism and discrimination in every form.”

The prime minister went on to condemn the vandalism in Montreal.

Trudeau has long spoken about the need to end racism, but his re-election campaign was almost derailed last September after pictures of him in blackface from years earlier emerged.

Conservative leader Andrew Scheer, who heads the largest opposition party, also spoke out against racism, and left-leaning New Democratic Party head Jagmeet Singh, the first minority leader of a Canadian political party, talked about the killing in Minneapolis of George Floyd, which sparked the protests.

“When you see someone that looks like you being killed like that, it makes you feel like you have no worth and no value,” Singh told reporters.

When asked if demonstrations could trigger a spike in coronavirus cases, Health Minister Patty Hajdu said people should bring hand sanitizer, wear a mask and try to maintain a safe distance if they attend a protest.