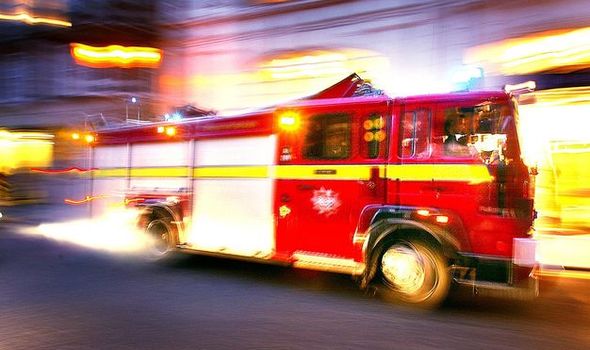 Footage of the inferno at the Secretaria de Segurança Pública [Secretary for Public Security] (SSP) of Rio Grande do Sul shows the fire has engulfed multiple floors of the building. According to the Fire Department, the flames would have started around 10pm local time (1am GMT).

There has not currently been any reports of injury or how the fire started.

According to initial information, the fire is believed to have started on the fourth floor.

In a statement on Twitter, the public security department said: “The SSP reports the occurrence of a fire in the secretariat’s headquarters building.

“The Military Fire Department has already been activated and is working to contain the flames.

“Preliminary information so far is that the building has been completely evacuated.”

The Public Transport and Circulation Company of Porto Alegre (EPTC) said the roads between Ramiro Barcelos and Castello Branco have been blocked.

The building is the HQ for the public security department of the federal district.

It is responsible for planning, coordinating and supervising the employment of the military and civil police, fire department and traffic department.

Porto Alegre is the capital city of the Brazilian state of Rio Grande do Sul and is the twelfth most populous city in the country.

Ranolfo Vieira Júnior, Vice-governor of the State of Rio Grande do Sul and State Secretary of Public Security, said on Twitter: “The very serious fire in the building of @SSP_RS had no victims.

“The causes and damages will be accurately investigated.

“Most importantly, the public security forces are 100 percent active on the streets, fighting crime.”

He added: “I have followed the work of fighting the flames at the site since the beginning.

“I come to command, right now at dawn, the crisis office that we are setting up.

“The governor @EduardoLeite_ is following everything in contact with me – and returns from Brasilia this Thursday morning.”