Who Are Gavin Newsom’s Enemies? 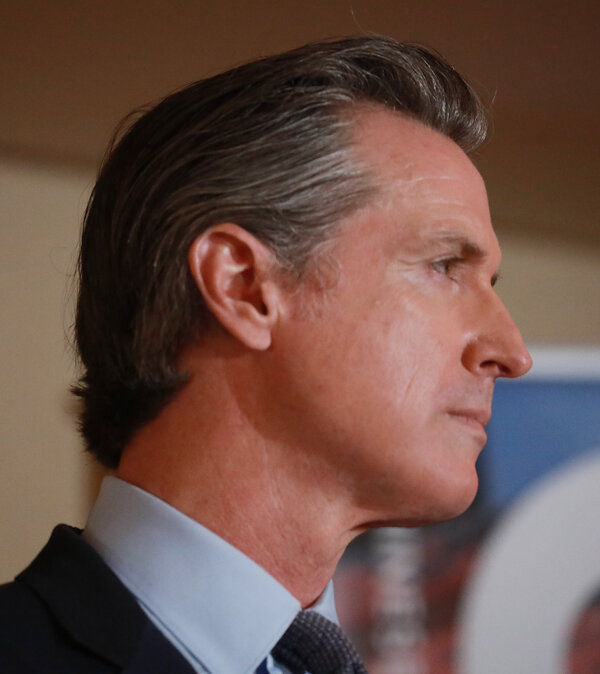 For Democratic officials aiming at higher office, California’s top political jobs have appeared to be the perfect launchpad.

This year, Kamala Harris went from representing the Golden State in the Senate to becoming the vice president. Alex Padilla, California’s secretary of state, was appointed to take Ms. Harris’s old job. And Xavier Becerra left his post as the state’s attorney general to become President Biden’s secretary of health and human services — always a big job, but especially so for an administration focused on confronting the coronavirus pandemic and strengthening the Affordable Care Act.

But there’s one big exception to this trend, and it’s at the very top of the state government. Gov. Gavin Newsom, 53, who less than a year ago appeared to have one of the brightest futures of any Democratic politician in the country, is fighting just to keep his job, amid a largely Republican-led recall effort that has already submitted more than two million signatures.

If roughly 1.5 million of those signatures are found to be valid, the state will move ahead with a vote to recall the governor and replace him. Already, about half a dozen candidates have filed to run in the event of a recall election.

One way to gauge the threat level: Speaker Nancy Pelosi spoke out yesterday in an attempt to pull the Democratic Party together around Mr. Newsom. She told reporters that the recall effort was “an unnecessary notion,” adding, “I don’t think it even rises to the level of an idea.”

But the public has another notion. A poll released this week by the nonpartisan firm Probolsky Research found that California voters were split on whether to recall Mr. Newsom. Forty percent supported recalling him, while 46 percent were opposed. That’s not overwhelming support — but it’s a clear sign that Mr. Newsom is in choppy waters, and would need to work hard to head off a recall if a vote does get scheduled.

How did Mr. Newsom, who was among the United States’ most popular governors in the early months of the pandemic, wind up here?

He benefited last spring from his proactive response to the pandemic, positioning himself as a foil to President Donald Trump and instituting a complex, regionally specific set of lockdown restrictions aimed at controlling the virus. Some polls at the time showed him receiving positive marks from more than four in five voters in the heavily Democratic state.

But he has been buffeted by frustration over those complex regulations, which have left many Californians confused and restless, and by the grief that came after wildfires ravaged the state this past summer. And for many voters, his personal behavior has reeked of political privilege: In November, he attended a high-priced indoor birthday party for a lobbyist friend, and it was reported that he was sending his children to in-person private school while the state’s public schools remained online-only. As a result, many voters’ frustration tipped over into outrage. By last month, his approval rating had fallen below 50 percent.

There’s still time for a lot to change: If the organizers of the recall effort reach the signature threshold, the vote to recall Mr. Newsom and to choose his successor — both would be done on a single ballot — probably wouldn’t occur until near the end of the year.

That recall effort is being led by Orrin Heatlie, a conservative and a former sergeant in the Yolo County Sheriff’s Department, who as recently as last year shared anti-vaccination and anti-L.G.B.T.Q. views online. But the endeavor has the backing of a number of deep-pocketed political action committees, most of them right-leaning.

Randy Economy, a political consultant and talk-radio host, serves as the lead adviser to Recall Gavin Newsom, the group organizing the effort. He said the governor’s behavior and demeanor had made the recall necessary. “It’s because of Gavin Newsom himself, and the way he conducts himself every day since he’s become governor,” Mr. Economy said in an interview. “It’s all been more about his image and self-aggrandizing, as opposed to fixing the problems.”

Mr. Newsom’s approval rating isn’t nearly as low as Gov. Gray Davis’s was in 2003, when voters ousted him in a recall. Arnold Schwarzenegger, running as a moderate Republican, was the beneficiary of that effort, winning the recall election and going on to serve as governor for more than seven years.

California politics are different — and decidedly more Democratic — than they were 18 years ago. Democrats now have a 2-to-1 advantage in terms of voter registration across the state. Just because there is a Republican-led effort does not mean that a Republican will be the one to ultimately benefit. Mr. Economy, who volunteered in 2016 for Mr. Trump’s presidential campaign but has also worked for Democrats in the past, insisted that his team’s goal was not partisan in nature.

“Our job is not to pick the next governor; our job is to make sure that this governor’s recalled and removed from office,” he said.

The state is light on prominent (let alone popular) G.O.P. politicians, and some ambitious Democrats already appear ready to run through the open door. All of which points to a possible irony: Even if it were to become only the second successful recall effort in California history, the push — led by conservative interests — could ultimately lift up another Democrat, possibly one to the left of Mr. Newsom.

Tom Steyer, a billionaire who ran for the Democratic presidential nomination last year, has conducted his own polling to gauge whether Californians might support him in an election if Mr. Newsom were recalled, Politico reported this week. And Antonio Villaraigosa, a former mayor of Los Angeles, recently called for California schools to reopen immediately in a rejection of Mr. Newsom’s more cautious approach. The governor’s team appeared to regard the news as a declaration of hostilities.

In reply to a Twitter post last week by our reporter Shane Goldmacher, Mr. Newsom’s close ally Sean Clegg shot back: “My old friend Antonio will embarrass himself and forever poison his legacy if he runs.”

In New York, a strategy of threats and intimidation wasn’t enough to prevent most of the state’s top Democrats from coming out against Gov. Andrew Cuomo this month after a string of sexual harassment allegations. But he has been able to hang onto his job by steadfastly refusing to step down.

One big question for Mr. Newsom is whether he will be able to win back the public’s favor in time to prevent his own Democratic allies from turning on him. That’s exactly the theme that Ms. Pelosi sought to drive home yesterday at her news conference. “I think the governor will beat this quite decisively,” she said, “and we’ll all help him do that.”

Drop us a line

Have you experienced long lines while waiting to vote?

As part of an expansive new law focused on voting restrictions, Georgia Republicans made it a crime to offer food or water to voters in line to cast their ballots.

We want to hear from you: Have you encountered long lines while waiting to vote? What was your experience like, and is this common in your area? How have lawmakers and officials in your state tried to help or to exacerbate the problem?

We are especially interested in hearing from respondents in swing states, urban areas and college towns. But we welcome all submissions; please email us at [email protected] and include your contact information, and you may be included in forthcoming news coverage.

On Politics is also available as a newsletter. Sign up here to get it delivered to your inbox.

Is there anything you think we’re missing? Anything you want to see more of? We’d love to hear from you. Email us at [email protected].