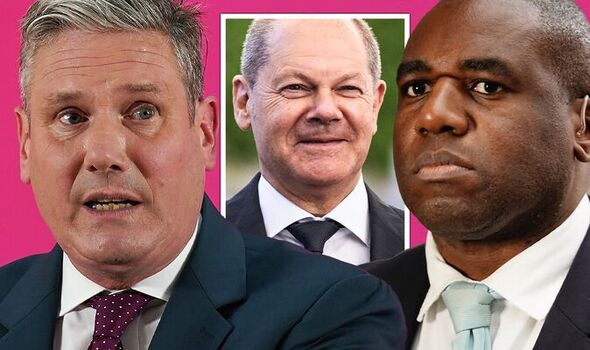 The Labour leader will hold face-to-face talks with German Chancellor Olaf Scholz on Friday with the pair set to discuss Brexit. Labour said the visit is “indicative of a future Labour government’s commitment to grow the UK economy and Make Brexit Work.”

But Sir Keir was branded “opportunistic” as it comes as the Conservative Party is locked in a fervent leadership race to replace Boris Johnson as Prime Minister.

“Like so many other highly paid professionals living in the North London bubble, he thinks we were mad to leave the EU.

“While he has ruled out taking us back in, he wants greater compliance with regulations set in Brussels with no say at all in the making of those rules.”

Sir Keir, along with Shadow Foreign Secretary David Lammy, are due to meet other senior German politicians and business leaders during the two-day trip.

Labour said discussions with the Chancellor will also focus on how Britain and Germany can work together to stimulate growth and harness the opportunities of the green transition.

Earlier this month Sir Keir was accused of a “cynical” U-turn on Brexit to win votes after he insisted a Labour government saw “no case” for rejoining the EU.

The Labour leader, who campaigned for a second referendum, gave a major speech insisting he wants to “make Brexit work”.

But he faced an immediate backlash from his own MPs, while Brexiteers said they did not trust his “conversion”.

Labour’s Rosie Duffield said: “If an MP was elected with an anti-Brexit mandate, they should continue to speak up against it.”