Simon Case will be named as cabinet secretary on Tuesday, the Financial Times reports.

He spent almost two years working as the Duke of Cambridge’s right-hand man, before temporarily moving to Downing Street earlier this year to help with the government’s response to the coronavirus pandemic. 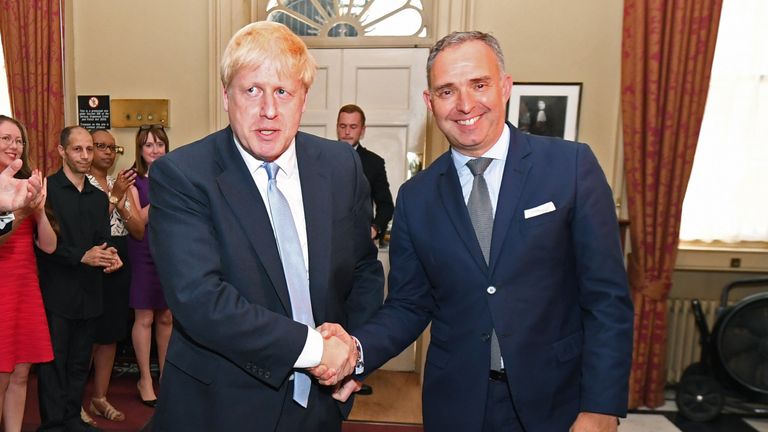 Government sources have declined to comment on the reports, but a Cabinet Office spokesman said: “An official announcement on the new cabinet secretary will be made on Tuesday 1 September.”

It comes after Sir Mark Sedwill announced in June that he would be stepping down from the role.

Simon Case instantly became a leading contender for the top job in the Civil Service after Boris Johnson poached him from Prince William to work in 10 Downing Street.

A former private secretary to David Cameron when he was prime minister, the 41-year-old had been working at Kensington Palace for the Duke and Duchess of Cambridge.

It’s claimed the PM rang William personally and asked permission to borrow his invaluable “Man Friday”. Mr Case won’t be returning to the Royals now, though few in Whitehall thought that was likely.

Mr Case is credited with turning William and Kate into a PR success story and it’s claimed his experience with the dysfunctional Royal household will help him cope with the PM’s controversial aide Dominic Cummings.

When Mr Case took on the newly created post of permanent secretary in Downing Street, it was also clear Sir Mark Sedwill’s days as cabinet secretary were numbered and the ex-courtier was the PM’s choice to succeed him.

Just like the Royals, he wears tweed suits and a Barbour jacket and is described as “slightly pompous”.

But crucially, he is seen as a Brexit expert, which is no doubt why he got the job. Critics will claim, however, that this makes him the PM’s “yes man”.