Senators pause for a funeral, with plans to return for weekend votes on the infrastructure bill. 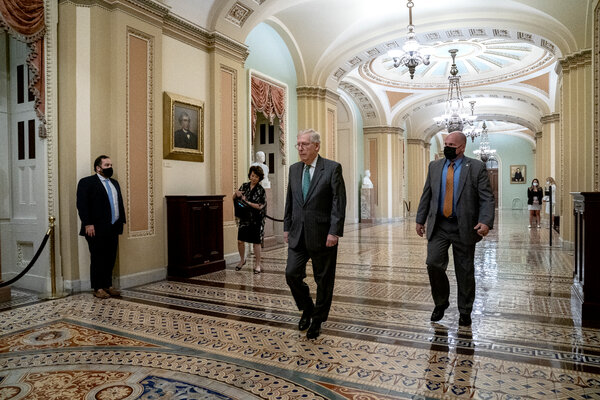 Presidencies are governed by events and priorities, and President Biden — propelled into office by epochal events in 2020 — has staked his political fortunes on passage of a $1 trillion infrastructure bill intended to demonstrate his competence, can-do attitude and commitment to bipartisanship.

On Friday, the capital paused on the cusp of fulfilling one of Mr. Biden’s top first-year legislative priorities to mark the passing of former Senator Mike Enzi of Wyoming, a conservative who retired last year and who died from injuries sustained in a biking accident. He was 77.

Senator Mitch McConnell, Republican of Kentucky and the minority leader, and several other senators traveled out West on Friday for the funeral service in an auditorium located on Enzi Drive in his hometown, Gillette. The group planned to return to Washington for what is expected to be a series of votes on the package over the weekend.

After a round of wrangling on Thursday, Senator Chuck Schumer, Democrat of New York and the majority leader, announced plans to hold a critical procedural vote on Saturday on the measure, which includes a massive infusion of federal funding for the country’s aging public works system.

About an hour after the Senate convenes at 11 a.m. Eastern on Saturday, the chamber is expected to take up the first of two expected test votes, in which the support of at least 60 senators is needed to end debate. A final vote on the bill could come as early as that afternoon, or senators could consider additional changes to the measure, pushing the debate into next week and delaying the Senate’s summer recess.