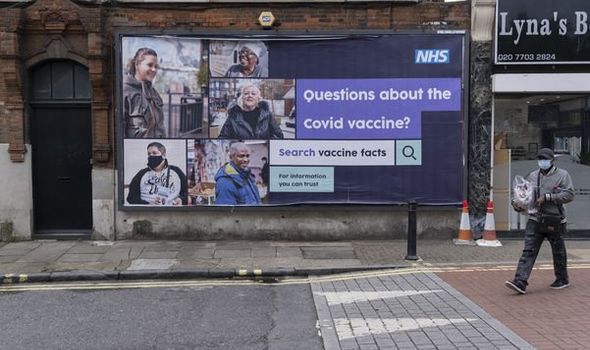 Professor Michie is a member of both Independent Sage and Spi-B, the Sage sub-committee that advises the government on behaviour. The email singles out Professor Carl Heneghan, the Oxford professor who runs the Centre for Evidence Based Medicine.

All have spoken out about the harms caused by lockdown. Many members of Independent Sage have called for tighter restrictions, and several were among the signatories of a letter in the Lancet last week calling for the lifting of restrictions to be postponed.

The email suggested ways of depicting the academics as or linking them to “anti-vaxxers”. They all vehemently deny this label.

Last night, former Supreme Court judge Lord Sumption condemned the email and said it was an example of scientists being “hounded” by those who could not counter their arguments.

He said: “I am afraid that there is a lot of this going on.

“Covid-denier’ and ‘anti-vaxxer’ are common smears against those who are neither of these things but do not accept that the government’s measures are justified.

“If the people behind this had rational arguments to deploy, they would use them instead of trying to hound those who disagree.”

Professor Michie sent the email to fellow members of Independent Sage on September 24 last year. The email was also sent to a journalist on a leftwing newspaper.

On September 20, Professor Heneghan was one of a small team of scientists who briefed Boris Johnson and argued for more targeted measures to protect the vulnerable rather than blanket lockdown.

The email states: “There’s quite a lot to Heneghan, and I imagine I am only aware of a small amount of it… but in case it’s of interest, then here’s some further background info.”

It suggests ways of linking Heneghan and Jefferson, including the fact they have written papers together and “have also co-written recent dodgy COVID-19 articles in the press”.

It also says Professor Heneghan has edited papers criticising other vaccines that were authored by Prof Jefferson.

It says of Professor Heneghan: “So his work is of great interest and use to the anti-vax community, which says a lot.”

It concludes: “I’m unsurprised but still weary to see Heneghan and friends getting involved in the pandemic in this way.

“Absorb or ignore as you wish, and more generally, keep up the good work!”

The email was written by Michael Head, Senior Research Fellow in Global Health from Southampton university and not a member of Independent Sage.

Professor Heneghan, whose work led to the government redefining how Covid deaths were classified, said: “I am the only professor of evidence based medicine in the country. I have never been ‘anti’ anything. I have worked tirelessly during this pandemic and the previous pandemic to reduce uncertainties and ask questions that might help improve health care decision making.

“This matters a lot to me which is why we have just carried out a review on the impact of lockdown on vital childhood vaccines.”

He added: “What these people are seeking to do by attacking other scientists is make their opinion more important than evidence and it shows they are not prepared to engage with an evidence based approach.”

The email also targets Peter Gøtzsche, a Danish researcher who founded the independent scientific research centre the Cochrane Centre who wrote to the BMJ in November 2020 challenging an analysis of covid fatality risk in Spain and claiming the infection fatality rate was comparable to the influenza pandemic in 2009.

It labels him an “anti-vaccine activist”.

Professor Gøtzsche said: “This takes me back to mediaeval times and not the way we do science in 2021.

“In science you need open debate to further scientific understanding.

Professor Gøtzsche, who was expelled from a health research body he founded in 1993, the Cochrane Centre, three years ago after criticising the way it ran, added: “During the covid-19 epidemic the debate has many times been the opposite, with only one truth, like a religious dogma. It is total nonsense and totally mind boggling to suggest we are anti-vaxxers.

He added: “People in this pandemic have been furthering their own agenda in all ways, and this involves below the belt punches.

“Rather than characterising Tom Jefferson and Carl Heneghan and me as anti-vax they show that academically they have lost the argument.”

Dr Jefferson said: “I am a strange anti-vaxxer given that I have had the covid vaccine and am awaiting my second shot and the fact we have just published a paper on the catastrophic effect that the covid restrictions have had on the mass implementation of important childhood vaccines like MMR.”

He added: “There seems to be the thought amongst some that by asking questions you are anti. Anti life, anti anything. It’s just a label to try and destroy someone. But these ad hominem attacks happen when you have no science. You have to go for the messenger.”

Professor Michie, who recently suggested masks could be in place “forever, to some extent”, did not respond to requests for comment.

Dr Michael Head, a research fellow in global health at Southampton University, who wrote the email, said: “The recently-published article published by Jefferson and colleagues around the importance of childhood vaccination is good to see. I very much agree that routine immunisation in lower-income settings is going to be an important issue going forward. Such articles should always reflect the evidence base at the time of publication.

“Vaccines will be the key tool that leads the world out of the pandemic and protect us all from other infectious disease threats. It is important that good science takes place to ensure we make progress in this area.”