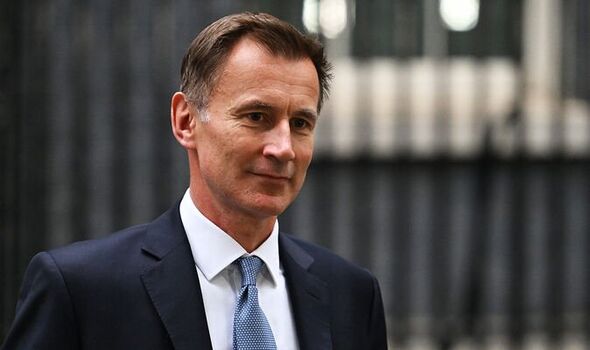 A source close to the new Chancellor said that “everything is on the table”.

They told the Times: “[Mr Hunt] is going to be delaying tax cuts as well as overseeing more aggressive cuts to public spending – more than was previously planned.

“What the Prime Minister wants him to do is send a very strong signal that the numbers add up and that has to get the support of the OBR and the Bank of England.

“The Bank is important because they are going to have to make a decision about raising interest rates just three days after the next budget.”

He said: “The thing that people want, the markets want, the country needs now, is stability.”

The income tax reduction delay is expected to save the Treasury £5billion pound a year.

The cut to 19p will still take place, according to reports, but next year, and at this time will save around 31million taxpayers up to £360 per annum.

DON’T MISS:
Hated Brexit deal ‘could shatter UK’ [OPINION]
Farage blasts those blaming conflict in Ukraine for inflation [NEWS]
Britons blast Tories and Labour who are ‘as bad as each other’ [OPINION]

“That’s a lot of billions going out of the door.”

Another source told the paper that recent discussions between the Treasury and the Office for Budget Responsibility confirmed the watchdog warned in its draft forecast that by 2027-28, there would be a black hole in public finances of up to £72billion.

Even allowing for the Government’s latest tax U-turns, the Treasury will still suffer a shortfall of tens of billions.