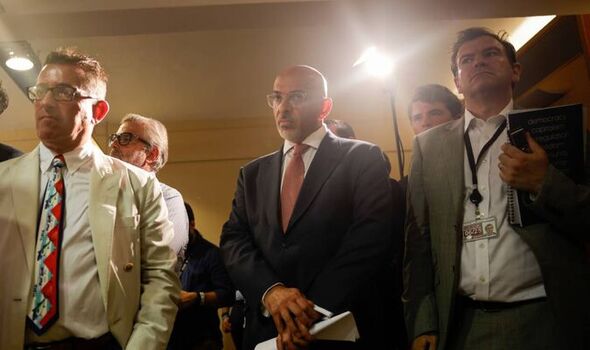 Attorney General Suella Braverman responded by insisting there is “no alternative but radical tax cuts” amid the cost-of-living crisis. Foreign Secretary Liz Truss also pledged to slash taxes “from day one” while billing herself as an experienced candidate to set herself apart from opponents with less Cabinet experience.

Jeremy Hunt, who has been health, foreign and culture secretary, also expressed a desire to “cut all taxes.”

But former Tory chancellor Lord Lamont warned of the leadership contest descending into a “Dutch auction” and that any “unfunded, irresponsible tax cuts” would drive up interest rates.

A row also broke out among the campaigns, with Robert Jenrick criticising candidates for pledging unachievable tax cuts at a time when the party’s “credibility” is under strain.

The former Cabinet minister, who is backing ex-chancellor Rishi Sunak, said “announcing fantasy tax cuts to help get through a leadership election is unwise.”

Lord Lamont told BBC Radio 4’s World at One: “I’m increasingly concerned because there is a danger that this leadership election is going to descend into a sort of Dutch auction of tax cuts which are not necessarily affordable, not necessarily rightly timed.”

“There is a danger at this point when the public finances, the amount we are borrowing, is not in a strong state. You can’t grow your way out of inflation, you’re just likely to add to it if you attempt to do that.

“I don’t suppose many people want to see interest rates above the level of inflation but if we start giving unfunded, irresponsible tax cuts the Bank of England will be faced with difficult choices indeed.”

Ms Braverman and Mr Zahawi both made speeches at the Thatcherite ConservativeWay Forward group as they try to win the support of fellow MPs.

Ms Braverman rejected critics’ warnings that cutting taxes too quickly would be the wrong move, arguing “in a cost-of-living crisis with spiralling costs, we know there is no alternative but radical tax cuts”.

Mr Zahawi, appointed Chancellor before shortly moving to push Boris Johnson out of office, said tax and spending had been “skyrocketing” for “too many years.”

He said he would reduce income tax to 19p next year and 18p the following year. A member of the audience appeared to faint as temperatures soared during the event at the ChurchillWar Rooms in Westminster.

Ms Truss, seen as one of the likely frontrunners, formally entered the race yesterday. The Foreign Secretary said she would “start cutting taxes from day one” by axing the National Insurance hike introduced in April, mirroring a pledge by Sajid Javid.

Key backer Business Secretary Kwasi Kwarteng accepted that public spending would need to be reduced to fulfil pledges of tax cuts. And he warned of “very dim prospects” if growth is not created to avoid “stagflation”, where slow economic growth coincides with high inflation.

Tom Tugendhat, chairman of the Commons foreign affairs committee who has never been a minister, pledged to cut taxes on jobs and fuel and painted his candidacy as a “clean start.”

He will today warn that tax cuts cannot be “the only round in the magazine” for boosting the economy and he will also call for a “stronger, fairer and more resilient economy.”