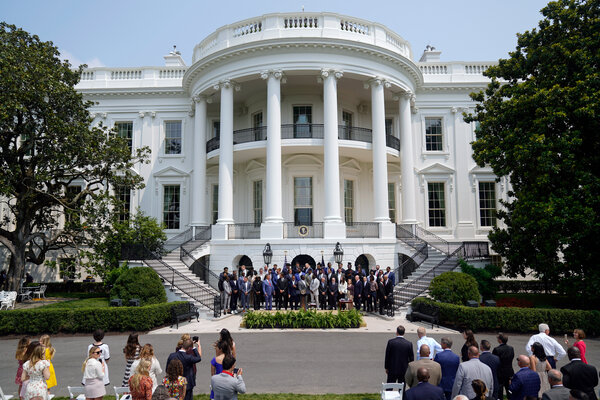 President Biden hosted a celebration with the 2021 Super Bowl champions, the Tampa Bay Buccaneers, on Tuesday morning at the White House, continuing a recent run of celebrations with title-winning athletes.

Mr. Brady, the Tampa quarterback who has missed several presidential team visits after winning previous Super Bowls with the New England Patriots, was questionable for attendance at the event this week. But he showed up on Tuesday, tanned in a dark suit and sunglasses, walking onto the South Lawn with his coach, his team owner and the president himself.

Mr. Biden opened the festivities, praising the Bucs for their persistence in reeling off an unbeaten run to the championship after starting the season with seven wins and five losses: “This is a team that didn’t fold, got up, dug deep,” the president said, relishing his role as a sort of cheerleader in chief. “It’s an incredible run.”

But it was Mr. Brady, the final speaker and a seven-time Super Bowl winner, who snagged the headlines with a pair of political jokes that appeared to be jabs at former President Donald J. Trump, with whom Mr. Brady has shared a long friendship.

After a game against Chicago last year, in which Mr. Brady momentarily forgot what down it was on the field, Mr. Brady joked that people began calling him “Sleepy Tom,” a reference to Mr. Trump’s penchant for calling Mr. Biden “Sleepy Joe” during the campaign.

Mr. Brady also invoked Mr. Trump's continuing and baseless claims that he actually won the 2020 presidential election, which many Trump supporters continue to believe. The quarterback said many people did not believe the Buccaneers could win the championship last year.

“I think about 40 percent of the people still don’t think we won,” Mr. Brady said.

He turned to Mr. Biden. “You understand that, Mr. President?” he said.

The celebration for the Buccaneers was held in 84-degree heat late Tuesday morning. Tampa Bay defeated the Kansas City Chiefs 31-9 earlier this year to win the N.F.L. crown.

Last month, Mr. Biden welcomed the World Series champion, the Los Angeles Dodgers, to the White House when the team was in town for a series against the Washington Nationals.