Biden Ran on Competence and Empathy. Afghanistan Is Testing That.

The chaotic endgame of the American withdrawal has undercut some of the most fundamental premises of President Biden’s presidency. 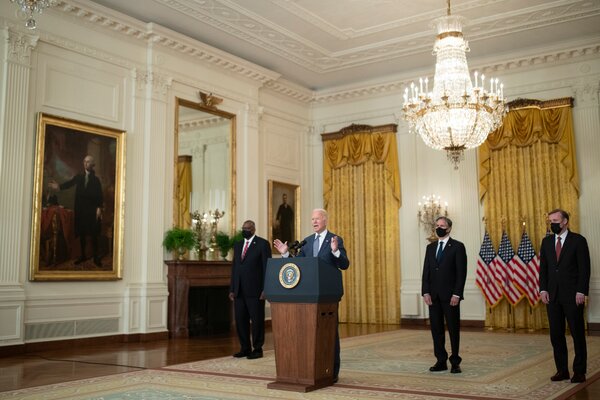 For most of the last week, in the fires of the worst foreign policy crisis of his young administration, the president who won the White House on a promise of competence and compassion has had trouble demonstrating much of either.

The chaos in Kabul and his own conflicting messages have left President Biden struggling to assert command over world events and seemingly more intent on washing his hands of Afghanistan than expressing concern over the humanitarian tragedy unfolding on the ground.

Mr. Biden’s team argues that it will not matter in the long run because Americans agree with his decision to pull out after 20 years of war and do not care what happens in Afghanistan as long as their fellow citizens are extracted safely. Afghanistan is America’s longest war, stretching through four presidencies, and none of those presidents found a way to disengage successfully.

But the tumultuous endgame of Mr. Biden’s withdrawal has nonetheless undercut some of the most fundamental premises of Mr. Biden’s presidency — that unlike his erratic, self-absorbed predecessor, he brought foreign policy seasoning, adults-in-the-room judgment and a surfeit of empathy to the Oval Office.

“I just had the feeling that he was so wrapped up in the decision itself that he forgot the basics of implementation,” said Leon E. Panetta, the former defense secretary who served alongside Mr. Biden in President Barack Obama’s administration. “The American people may be with you on the decision, but if they see chaos, they’re going to be very concerned that the president doesn’t have his act together.”

David Axelrod, a former strategist for Mr. Obama, said he had no doubt that most Americans agreed with Mr. Biden that it was time to wrap up the Afghanistan operation. “The way it’s ending, at least thus far, is more problematical,” he said, “and cuts against some of his core perceived strengths: competence, mastery of foreign policy, supreme empathy. It’s as if his eagerness to end the war overran the planning and execution.”

After days of withering criticism from allies as well as adversaries, Mr. Biden tried to repair some of the damage on Friday with a half-hour appearance in the East Room of the White House where he asserted that the evacuation operation had “made significant progress” while acknowledging that images of desperate Afghans chasing planes and handing a baby over barbed wire have been “heartbreaking” and “gut-wrenching.”