A court case is said to have prompted an internal dispute over whether to say that wartime prisoners at the naval base have due process rights. 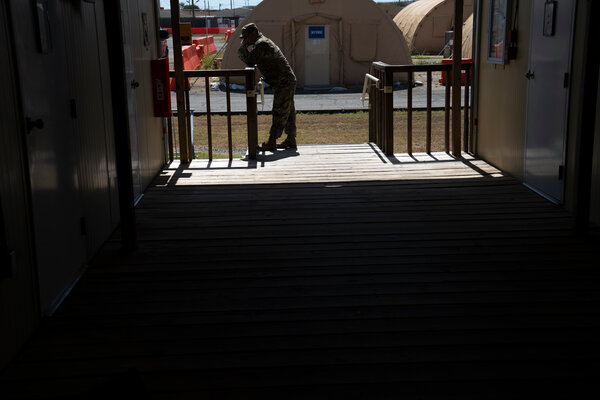 By Charlie Savage and Carol Rosenberg

WASHINGTON — The Biden administration legal team is divided over whether the government should say that detainees at the American naval base at Guantánamo Bay, Cuba, have due process rights under the Constitution, according to people familiar with internal deliberations.

The Justice Department is set to file a brief by Friday night that is supposed to take a position on that question for a case involving a 53-year-old Yemeni man, Abdulsalam al-Hela, who has been held without charge or trial at the wartime prison since 2004. During the Trump administration, the department had argued to an appeals court panel that he had no due process rights.

The case is now before the full Court of Appeals for the District of Columbia Circuit. Legal scholars and lawyers for other detainees — including those charged at a military commission — have closely watched the case because it has squarely raised a legal and human rights issue that years of litigation over Guantánamo have yet to answer.

Lawyers in national security roles across the executive branch are said to have been arguing for weeks over what the brief should say. Some Justice Department officials — including career government lawyers who have spent years under administrations of both parties defending Guantánamo detention policies in court — are wary of taking a position that could make it harder to win such cases.

But other officials contend that it would clash with the Biden administration’s values not to clearly say that detainees have due process rights. The question first arose when the George W. Bush administration began taking wartime prisoners to the naval base in 2002 and claimed that courts had no jurisdiction and that the Geneva Conventions did not apply there, leading critics to call it a legal black hole.