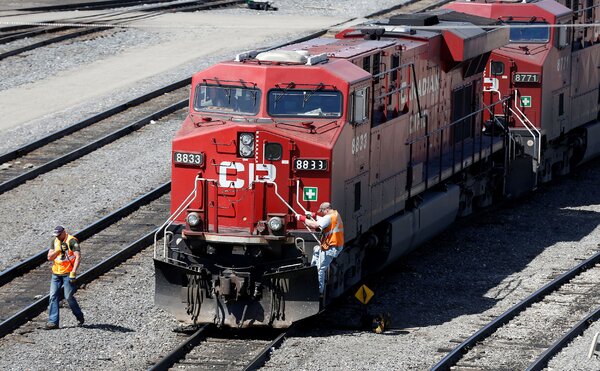 A long and winding journey

One of the most compelling dealmaking sagas this year hasn’t been in tech, pharma or another industry that often dominates the news. It is a bidding war among railroads — what century is this again? — that has generated high drama. At stake was possibly the last major acquisition of a railroad, ending a long period of consolidation in the industry.

Canadian Pacific has emerged as the victor in a long-running battle to acquire Kansas City Southern, putting it in position to become the first railroad operator whose network spans the U.S., Canada and Mexico, allowing it to capitalize on trade flows across North America. Most notably, it won with a lower offer than rival bidder Canadian National, which announced yesterday that Kansas City Southern was terminating the merger agreement the companies signed in May.

The key was “to avoid a bidding war,” Canadian Pacific’s C.E.O., Keith Creel, told DealBook. So how did it prevail with a lower price? Hop aboard for a quick recap:

April 20: Canadian National barges in and submits a higher bid worth $33.7 billion. Canadian Pacific’s Creel calls the offer “illusory” and said it would face regulatory resistance. Kansas City Southern acknowledges the bid, saying it will “respond in due course.”

May 6: The Surface Transportation Board, which oversees rail deals in the U.S., approves Canadian Pacific and Kansas City Southern’s use of a voting trust. This is a common structure in rail deals, but is controversial because it allows companies to proceed with integration before obtaining full clearance.

July 9: The Biden administration announces a sprawling executive order targeting competition, including in the railroad industry. The Surface Transportation Board is an independent body, but the climate in Washington has now shifted when it comes to corporate consolidation.

Sept. 15: It’s over for Canadian National, which says its deal with Kansas City Southern has been terminated. Not pursuing the deal any further is “the right decision” for Canadian National’s shareholders, said the railroad’s chief, Jean-Jacques Ruest. As consolation, his company will get a $700 million breakup fee, as well as a refund of the fee, worth another $700 million, that it had paid to end the original merger deal.

What happens next: Kansas City Southern’s deal with Canadian Pacific still needs regulatory and shareholder approval, so there could be more detours ahead. Canadian Pacific’s Creel is confident that the takeover will go ahead because there is little overlap between the companies and the combined network would bring trucks off the road at a time when governments are focused on reducing carbon emissions.

The F.D.A. said vaccines remain effective without boosters. The review of Pfizer’s application for a booster shot comes days before public health agencies review Biden’s plan to offer a third dose to Americans. Several conflicting studies have revealed disagreement among scientists about whether a booster is necessary.

Executives visit the White House to discuss vaccine mandates. The meeting yesterday was intended to highlight President Biden’s argument that mandates are good for the economy. One attendee, Tim Boyle of Columbia Sportswear, told The Times that Biden’s recent executive order requiring vaccination at large companies made it easier for executives to introduce the policies.

An effort begins in California to recall the recall. After the recall of Gov. Gavin Newsom was defeated on Tuesday, the state’s legislative leaders are discussing a constitutional amendment that would make it more difficult for recall votes to qualify for the ballot. With the vote behind him, Newsom now returns to dealing with California’s housing shortage, among other issues.

The U.S. squares up against China in a new defense deal. The leaders of the U.S., Britain and Australia announced an agreement that would see the allies challenge China’s territorial claims in the Pacific by deploying nuclear-powered submarines there. Sharing technology for naval reactors with Australia is a significant move: The U.S. last shared nuclear propulsion technology with an ally in 1958, in a similar agreement with Britain.

Are Wall Street conferences back? This week, 2,500 people attended the flagship SALT conference in New York City, the most since the conference was founded in 2009. All in-person attendees were required to show proof of vaccination to enter. Another 1,500 attendees tuned in virtually.

Goldman Sachs still wants to be the Walmart of banking

Nearly a decade ago, Lloyd Blankfein, then the C.E.O. of Goldman Sachs, said he hoped to turn the elite investment bank into the Walmart of Wall Street.

The firm launched a consumer-focused lending operation called Marcus and set a goal of generating at least $6 billion in annual revenue from lending activities by the end of 2020. It came up more than $1 billion short. And the head of Marcus, Omar Ismail, left the firm earlier this year to head a fintech company backed by Walmart, prompting some to say Walmart was more interested in becoming a bank than Goldman was interested in courting retail customers.

Goldman isn’t ready to give up its consumer banking ambitions, as a new acquisition makes clear. Yesterday, the bank announced that it would buy GreenSky, which arranges consumer loans for large purchases like home renovations or cosmetic surgery, for $2.2 billion in one of Goldman’s largest-ever acquisitions.

The “buy now, pay later” sector is hot right now, with Amazon, Square and others recently getting into the fast-growing market via deals and partnerships. GreenSky, though, has struggled. It went public at a valuation of around $4 billion in 2018. In July, it paid a $2.5 million penalty to the Consumer Financial Protection Bureau for allowing retailers to take out loans for thousands of people who did not request them.

Goldman hopes that GreenSky will do better as part of one of the world’s largest financial firms. Making loans in-house with Goldman could give the service an advantage over its competitors, which rely on partner banks. But the jury is still out on whether the Wall Street stalwart can make meaningful inroads on Main Street.

“A few have come before but many are about to follow. The door is opening now, and it’s pretty incredible.”

— Jared Isaacman, the billionaire founder of the payments company Shift4, who financed a trip on a SpaceX rocket, taking four non-astronauts (including himself) into space last night. The capsule will spend about three days orbiting Earth, a step toward a future where space travel might become accessible to more than professional astronauts and the superrich.

What went wrong at Quibi

When the subscription video service Quibi launched in April 2020, it had a lot going for it: the veteran executives Jeffrey Katzenberg and Meg Whitman at the helm; $1.75 billion in funding; star producers like Jennifer Lopez; and a pitch that seemed tailored for the TikTok age (episodes shorter than 10 minutes, made to be viewed on a smartphone).

But the buzzy start-up shut down six months later. Katzenberg has said the pandemic was to blame; others have said mismanagement was a factor. For the “Sway” podcast, Times Opinion’s Kara Swisher spoke with Katzenberg about what went wrong.

On the pandemic’s impact:

“This was designed for on-the-go, in-between moments on your phone — at the very moment in time that we stopped being on the go and having those in-between moments on our phone. We were in front of our TV sets on our couch. And we were now suddenly being compared to things like Netflix and Disney and HBO. And for sure we could not compete with them.”

On deciding to pull the plug:

“The moment that it was clear to us that it did not have product-market fit and was not going to succeed, we wanted to shut the business down. And this will come out in the coming weeks, but we will have returned many, many, many hundreds of millions of dollars to our investors. I’m proud of the fact that we didn’t just run the clock out.”

Listen to the full episode here.

Discord, the online chat service, raised funds at a $15 billion valuation, double its value in a round last year. (Bloomberg)

Gogoro, a Taiwanese electric scooter and battery-swapping start-up, plans to go public in the U.S. via a $2.3 billion SPAC merger. (WSJ)

A bill proposed in the Senate would eliminate a key tax advantage of exchange-traded funds. (FT)

“The F.D.A. Should Regulate Instagram’s Algorithm as a Drug” (TechCrunch)

As the Treasury published a report on the spiraling cost of child care, Janet Yellen said she might not be where she is today without an “excellent babysitter 40 years ago.” (CBS News)

Best of the rest

Walmart will test a self-driving delivery service with Ford. (NYT)

How Kevin Merida, the new executive editor of the L.A. Times, plans to reinvent the paper. (Vanity Fair)

“The Country Where the Banks Ran Out of Money” (Bloomberg Opinion)

Robinhood is recruiting younger investors by offering incentives to college students if they sign up for the app with their school e-mail address. (WSJ)

John Kelly, the former White House chief of staff, joked that firing Anthony Scaramucci was “the most enjoyable thing” he did in the role. (Twitter)

We’d like your feedback! Please email thoughts and suggestions to [email protected]