We’re covering the effects of India’s lockdown on the most vulnerable populations, an awakening among China’s young people and Egypt’s female lion tamers. 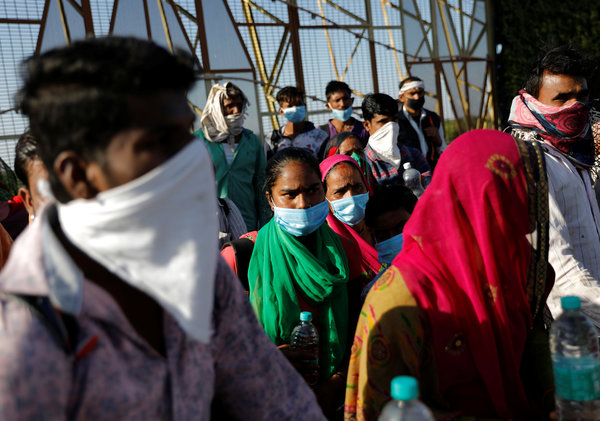 Stranded and hungry in India’s lockdown

The effects of Prime Minister Narendra Modi's restrictions on movement, affecting some 1.3 billion people in India, are coming into view, as the country’s most vulnerable populations struggle to eat or to find shelter, and get punished for it.

Hundreds of thousands of migrant laborers have begun long journeys on foot to get home, having been rendered homeless and jobless by the lockdown measures. More than a dozen have died in the process.

With businesses shut down, many of the millions of migrants who had moved to cities to find work, and often lived in their workplaces, were trying to return home. They planned, in some cases, to walk hundreds of miles — until they were beaten back by the police. There are no clear plans by the government to bring migrants home.

And the country’s homeless population — one of the largest in the world — is deeply struggling, with many people not knowing about the coronavirus until they are ordered off the streets by the police; some said they had been beaten by officers for being out in public during the nationwide lockdown.

Shelters and soup kitchens are overwhelmed; religious institutions that normally feed the homeless are closed; and aid workers warn that the situation may deteriorate into violence if people continue to go without food.

Quotable: “You fear the disease, living on the streets — but I fear hunger more, not corona,” said one migrant working in Delhi who was trying to return home, which was 125 miles away.

Here are the latest updates and maps of the pandemic.

We also have a daily tracker showing the virus’s trajectory by country and U.S. state, as well as a look at where Americans have been urged to stay home.

Iraq is asking for donations to weather the pandemic, as oil revenues, which its government depends on, have plummeted.

Moscow declared a lockdown starting Monday, limiting residents to essential activities within 100 meters of their home.

President Trump walked back threats of a lockdown on New York, New Jersey and parts of Connecticut where outbreaks have exploded. The Centers for Disease Control and Prevention instead issued a travel advisory for those states.

Spain’s elderly populations are suffering in the country’s devastating outbreak. And horror stories from nursing homes, where some people were abandoned, are shaking the nation’s self image — particularly in a country that prides itself on public health and its respect for family bonds.

Rich Europeans are fleeing for their second homes amid the virus, hoping for beaches or mountains to ease their confinement, at the risk of local populations with fewer doctors compared with major cities.

The Times is providing free access to much of our coverage, and our Coronavirus Briefing newsletter — like all of our newsletters — is free. Please consider supporting our journalism with a subscription.

For much of their lives, many young Chinese people have been content to give up political freedoms as long as the ruling Communist Party upheld its end of an unspoken deal — providing jobs, stability and upward mobility.

Now, the virus has exposed the limits of that trade-off. Young people are pushing back on the party’s missteps and its blind spots in the financial slowdown caused by the outbreak.

And if the pandemic sets off a global recession that saps demand for Chinese goods, resentment may build.

The details: Increasingly, young people are speaking out and organizing protests to demand compensation for the effects of the outbreak. Some build “cyber-graveyards” to compile news and commentary that was censored elsewhere. Others organize donations for overwhelmed health workers.

Quotable: “These recent events have made some people see more clearly that criticizing their country does not mean they don’t love their country,” a 34-year-old Beijing resident said.

If you have 10 minutes, this is worth it

In the heart of Italy’s outbreak

No country has been hit harder by the coronavirus than Italy, and no province has suffered as many losses as Bergamo. Officially, 1,878 people have died there, but the toll may be four times higher.

“At this point, all you hear in Bergamo is sirens,” said Michela Travelli. Above, her father, Claudio Travelli, tested positive for the virus. He is still alive.

Here’s what else is happening

Philippines plane crash: A plane used as an air ambulance to fight the coronavirus outbreak burst into flames as it took off from Manila’s airport for Japan on Sunday night, killing all eight people aboard, including medical workers.

Snapshot: Above, Luba el-Helw, a lion tamer in Gamasa, Egypt, showering a lion named Kiara with love. The struggle for women’s equality lags badly in Egypt — but in this field, women are dominant. The top female lion tamers draw legions of crowds each year, with spangled outfits, stage names and tricks like rings of fire.

What we’re watching: The first episode of Pluto Living on YouTube. “I’m hooked on Pluto the dog, a Canadian terrier dispensing wisdom on toilet paper and social distancing to help the two-leggeds during a time of crisis,” says Tara Parker-Pope, the Well editor. “Laughter is still good medicine.”

Now, a break from the news

Cook: These great biscuits call for a few pantry staples, a little sour milk or yogurt and very little mixing.

Read: Parul Sehgal’s elegant review of Rob Doyle’s novel “Threshold” is a pleasure in itself. So is Gabrielle Hamilton’s essay about cooking crepes.

Listen: It’s time for some new music, here brought to us by The Times’s pop-music team, with Dirty Projectors and more. And in case you missed it, here’s Taffy Brodessor-Akner talking to and about Tom Hanks, on a special episode of “The Daily.” It’s sweet.

Play: Time to bring back 20 Questions and Ghost! There’s always our crosswords, and Spelling Bee.

And now for the Back Story on …

Home schooling in the age of coronavirus

Francesca Donner, our Gender Initiative editor, and Corinne Purtill, a Los Angeles-based journalist, chatted about managing home schooling during the pandemic for In Her Words. Here’s an excerpt from their conversation.

This week, we are trying a loose schedule of schoolwork in the morning and free play in the afternoon. Will it work? I have no idea. All of life is an experiment right now.

FD: In concept, I like that very much. But does schoolwork in the morning need to be overseen by you or can you leave them to it?

CP: My 9-year-old daughter and I talk the night before about which activities from the school’s suggested list she’ll want to do in each subject area. She’s old enough to be able to tackle most things on her own, and if she has any questions, I’m around. I’m around a lot these days.

At lunchtime, I look over what she’s done, mainly just to make sure she’s been doing something on the laptop besides watching people make slime on YouTube. The afternoon is free time.

FD: And what does free time actually entail?

CP: My daughter can do her own thing. Her little brother, who can’t read yet, needs more attention.

When I’ve got work, I juggle: playing cars while listening to a conference call, setting him up with a project before opening my laptop and when I need to, turning on the TV or handing him my phone without guilt. Some structure is helpful, but I try not to overplan.

That’s it for this briefing. Stay safe, and see you next time.

Thank you
To Sam Sifton, who oversees The Times’s lifestyle and cultural coverage, for the break from the news. You can reach the team at [email protected]

P.S.
• We’re listening to “The Daily.” Our latest episode is a special edition featuring a Times editor who wrote a gripping essay last week about what she learned when her husband got sick.
• Here’s our Mini Crossword, and a clue: Social media accounts that are best ignored (four letters). You can find all our puzzles here.
• NYT Live invites readers to a conference call with Times Opinion’s philosophy forum, The Stone, at 4 p.m. Eastern on Monday (4 a.m. Tuesday Hong Kong). An editor, Peter Catapano, and the philosopher Simon Critchley will discuss how mortality and hypochondria relate in our new pandemic reality. R.S.V.P. here.