Belarus, Hong Kong protests, coronavirus in the U.K.: Here’s what you need to know.

We’re covering the fourth weekend of unrest in Belarus, the quashing of protests in Hong Kong and the far-off collision of two black holes. 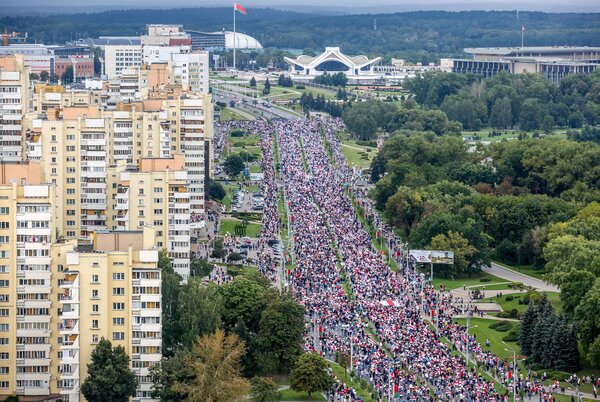 A fourth Sunday of protests in Belarus

Tens of thousands of protesters flooded into towns and cities across Belarus, signaling the depth of anger at President Aleksandr Lukashenko, who has shown no sign of bending despite repeated calls to resign.

Defying government warnings, protesters in Minsk paraded up to lines of riot police officers, shouting, “Shame!” and “Go away.” They waved red and white flags, formerly the national flag until Mr. Lukashenko replaced it a year after he took office with a more Soviet-looking standard.

Opinion: The situation in Belarus invites comparison to the Polish trade union Solidarity’s campaign for freedom from Moscow 40 years ago, writes Bartosz T. Wielinski, an editor at the Polish newspaper Gazeta Wyborcza. But there are key differences.

Analysis: Mr. Lukashenko has been fortified by strong Russian support. President Vladimir Putin of Russia announced late last month that he had formed a reserve force of security personnel ready for action in Belarus if “the situation gets out of control.”

Sound of the revolution: Since the start of Mr. Lukashenko’s authoritarian rule in 1994, the country’s homegrown rock musicians have been forced underground. But it is as though the unrest has woken these grizzled rockers from a quarter-century of cryogenic sleep, giving them new relevance as the soundtrack to the protests.

Nearly 300 people were arrested during protests in Hong Kong on Sunday, the scheduled date for a legislative election. Thousands of police officers in riot gear filled the streets. Videos showed plainclothes officers using pepper spray at close range and dragging a man across asphalt and sidewalks before putting him in handcuffs.

The election was postponed for one year because of the pandemic, but many in the pro-democracy camp accused the government of stalling to avoid the defeat of establishment candidates. The protests were also an expression of public anger at a draconian security law imposed by Beijing that is silencing dissent.

A major shift: Our reporters documented the chilling effect that the law has had on free speech in Hong Kong.

On the mainland: Journalists from CNN, The Wall Street Journal and Getty Images who tried to renew their Chinese media credentials last week were told that their cards, usually good for one year, would not be reissued.

The U.K. reports its highest daily cases since May

Britain has recorded a huge increase in the number of people testing positive for coronavirus, with 2,988 reported cases on Sunday, the highest daily total since May 23, when the country was still in lockdown. The bulk of the new cases was in England, with 208 cases recorded in Scotland and 98 in Wales. The total number of deaths rose by two to 41,551.

Speaking to the BBC, Health Secretary Matt Hancock said the rise was predominantly among young people. “Of course, younger people can pass on the disease to their grandparents, and we do not want to see that,” he said. Schools reopened in England and Wales last week, raising concerns about a new spike in infections.

Here are our latest updates and maps of the virus outbreak.

In other pandemic developments:

Many experts are skeptical about quick at-home tests for the coronavirus. There is not really yet any data that show they will work, they say.

The first famines of the coronavirus era could soon hit four chronically food-deprived conflict areas — Yemen, South Sudan, northeast Nigeria and the Democratic Republic of Congo — the top humanitarian official at the United Nations has warned.

Melbourne, Australia’s second-largest city, on Sunday extended its lockdown by two weeks until at least Sept. 28. The state of Victoria, the center of Australia’s worst outbreak, has been under lockdown since early August.

If you have 8 minutes, this is worth it

The black holes that shouldn’t exist — but certainly do

In a galaxy far, far away, a pair of black holes went bang — or, actually, made a loud, sharp chirping noise.

Astronomers reported on Wednesday that they had detected the loudest, most massive and most violent collision yet between two Goliaths of darkness. (The actual moment of the crash was some seven billion years ago.) That short signal from long ago has left astrophysicists with new questions about how black holes form and grow.

Here’s what else is happening

Brexit: Ahead of further trade negotiations with the European Union, Prime Minister Boris Johnson said Britain could walk away from the talks within weeks if an agreement were not in place by Oct. 15. A no-deal exit would be a “good outcome for the U.K.,” he said.

U.S. presidential campaign: Polls show the race for the White House largely stable but tightening slightly in some states, with President Trump recovering some support from conservative-leaning rural voters. Joe Biden continues to enjoy an advantage over the incumbent, especially in populous areas hit hard by the coronavirus.

Birmingham manhunt: A search was underway in the English city on Sunday for a man who was said to have carried out a series of stabbings across the city that left at least one person dead and seven more wounded. The police are not treating the rampage as terrorism.

“Hotel Rwanda”: President Paul Kagame of Rwanda said that Paul Rusesabagina, the inspiration for the 2004 film who now faces terrorism charges, had not been kidnapped from Dubai but had been lured to Rwanda in a “flawless” operation.

U.S. Open: Novak Djokovic, the No. 1 player on the men’s tour and the tennis tournament’s No. 1 seed, was defaulted from the event on Sunday after inadvertently striking a lineswoman with a ball he had hit in frustration. It fell under the Grand Slam rule book’s definition of “physical abuse.”

Featured video: About 200 people were rescued by helicopter over the weekend after a fast-growing wildfire, above, trapped them in the Sierra National Forest in California. About 20 people were injured, and some were taken to area hospitals.

Lives lived: David Graeber, the radical anthropologist and provocative critic of economic and social inequality, who coined the Occupy Wall Street movement’s slogan, “We Are the 99 Percent,” died last week at 59 in a hospital in Venice.

What we’re reading: This article in The Record on a one-of-a-kind love story. “She was a nun. He was a priest. Or at least they were until their paths crossed in Newark during the tumult of the 1960s,” Will Lamb, an editor on the Express desk, writes of this “unusual and delightfully surprising love story by their son Terrence McDonald of The Record.”

Now, a break from the news

Cook: This sheet-pan recipe for roast chicken and plums is mostly fuss-free. Sliced red onions caramelize in the plummy juice.

Read: Our reviewer recommends three sizzling new thrillers including “The Eighth Detective,” a debut novel by Alex Pavesi, which she describes as a “cerebral box of delights.”

Do: If you’re unsure whether there’s a “right” way to charge your phone, you’re not alone. Here are some tips on extending the life of your phone battery.

Cut the boredom with these ideas from our At Home section on what to read, cook, watch and do.

And now for the Back Story on …

Stories of bravery and adversity, remembered

The 75th anniversary of the end of World War II inspired The Times Magazine to create a yearlong series documenting lesser-known stories about the war and its aftermath through original reporting and first-person accounts in a series called “Beyond the World War II We Know.” Here’s an edited excerpt from Times Insider’s look at how the project came about.

Led by the Times editors Lauren Katzenberg and Dan Saltzstein, the project sought to push beyond the “typical, expected World War II coverage,” Mr. Saltzstein said. The Times invited readers who had served in the war, or whose family members had, to share stories and photographs via a form on The Times’s website, reaping about 500 responses. “It was just really incredible to get such a response, and to read everyone’s stories,” Ms. Katzenberg said.

The number of people who could still provide eyewitness accounts is diminishing all of the time, Mr. Saltzstein said, adding, “This is probably the last chance we’re going to be able to hear from them.”

One such story remembers the Dutch track-and-field star Fanny Blankers-Koen, who became the first woman to win four gold medals at a single Games at the 1948 London Olympics, transforming the reputation of women’s athletics for good. By some accounts, she was three months pregnant at the time.

Even after women’s track and field was introduced at the 1928 Amsterdam Olympics, cultural dismissiveness persisted for decades. “They were not used to it,” Blankers-Koen said of her detractors, “but I was not listening to them. I did what I wanted to do.”

That’s it for this briefing. Have a great start to the week.

Thank you
To Melissa Clark for the recipe, and to Theodore Kim and Jahaan Singh for the rest of the break from the news. You can reach the team at [email protected]

P.S.
• We’re listening to “The Daily.” Our latest episode is about an attempt to bring back theater amid the pandemic.
• “The Killing of Breonna Taylor,” a new documentary from the series “The New York Times Presents,” reveals details about the drug raid in Louisville, Ky., that ended with the death of the 26-year-old E.M.T.
• The word “slondok” appeared for the first time in The Times on Saturday, as noted by the Twitter bot @NYT_first_said.
• Here’s our Mini Crossword, and a clue: “Baptism or bris” (Four letters). You can find all our puzzles here.