Opinion | To Focus on Hamas Is to Miss the Point 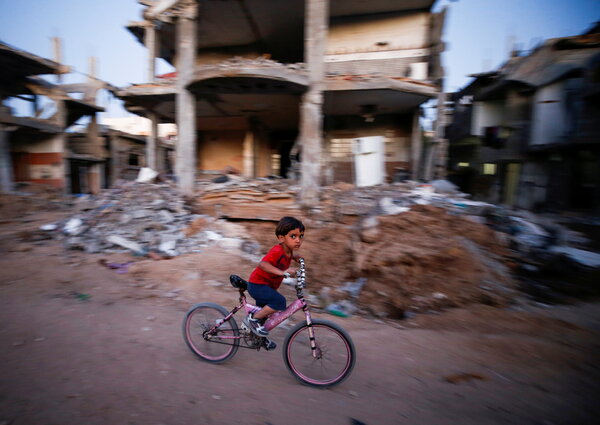 When I was nine years old, I was shot by the Israel Defense Forces. Most people I grew up with in Gaza have a story like this: a near miss, a face-to-face confrontation with a fatal bombing, a massacre. Mine is nothing special.

It was 1992, during the first intifada, and I was coming home from the afternoon shift at an overcrowded school for refugees. In those days, there were regular scenes of defiance and confrontation outside the school entrance, between the Israeli militarized vehicles doing their rounds and the kids from the secondary school nearby. To my 9-year-old self, the clashes were a huge inconvenience.

My favorite show, the American soap opera “The Bold and the Beautiful,” started 10 minutes after my last class, on Israel Channel 2. I looked forward to it all day, to watching it before my father, who wholly disapproved, returned home from his clinic.

I had to cross the street to get home. That day was a typical school day: Israeli jeeps on my right, classmates on my left. Barricades had been set up, tires were on fire, thick black smoke filled the air. Gunshots would burst out frequently. I waited for what felt like a reasonably long lull and then I ran across. I heard the bang at the same time that I felt a burning sensation in my calf. I blacked out with the image of Ridge and Brooke, the main protagonists of the show, finally reuniting.

A neighbor took me to the hospital. Thankfully the injury wasn’t severe: A glancing shot, a mere flesh wound. But the pain was immense for weeks. I never did get to see that episode.

Now it’s 2021, and I’ve been living in Britain for 12 years, happily married with two young children. I was, and am, a lucky one. Luckier than lucky. Waking each morning for most of the last two weeks to scroll through the latest lists of the dead and swipe through pictures of my old neighborhood, school, university buildings and the places of my childhood destroyed, I asked myself: What’s so hard for people to understand? Home is a universal concept, isn’t it? You only have one home, and it’s precious. So why are some people still rotely saying that the situation in Gaza is complicated, or that it’s about religion? For many of us, it’s neither of these things.

And it’s not about Hamas either.

President Biden’s announcement about the cease-fire on Friday emphasized the diplomatic efforts conducted with Israel, the Palestinian Authority in the West Bank and Egypt, as mediator. He said that Gaza would be rebuilt with international help and that, “we will do this in full partnership with the Palestinian Authority — not Hamas, the Authority — in a manner that does not permit Hamas to restock its arsenal.” But by pointedly excluding Hamas, the Biden administration only perpetuates the myth that Hamas is the central problem.

Hamas was democratically elected — in elections foisted upon Gaza by the Bush administration in 2006 with the blithe assumption that the mainstream secular party Fatah would win, led by the United States’ proxy hard man there, Mohammed Dahlan. Years of corruption — not to mention torture and human rights abuses — meant that many Gazans had lost faith in Fatah by then and weren’t prepared to vote the way Washington wanted them to. Hamas had been a militant Islamic resistance movement, born in the late 1980s, partly from Israel’s occupation of Gaza, and since it was a highly religious party, many of us assumed that at least it would be less corrupt.

Unfortunately, we don’t get elections every four years in Gaza, and Hamas’s victory was something that Gazans soon learned to regret. Critics of the government regularly are beaten, sometimes half to death, and freedoms are restricted. But we haven’t had a chance to vote Hamas out of power; 2006 was the last election we had.

Which is perfect for the Israelis. Hamas, with its iron grip and rocket attacks, is the ideal hook on which to hang all blame. Its popularity has declined since 2006, though that has been buoyed lately — but that, too, actually is irrelevant. What Palestinians think of Hamas has nothing to do with what they think of the right to a legitimate resistance. And most of us believe in the latter. Who wouldn’t in our position?

We knew that the rickety rockets shot from Gaza were all that the Israel Defense Forces and Prime Minister Benjamin Netanyahu needed to redirect public attention on Israeli self-defense and away from the harms inflicted on Palestinians. This isn’t Hamas’s first rodeo. And the provocation that started all this, the expulsion of Palestinians from their homes in East Jerusalem, wasn’t just a provocation. It was an attack on the very last stand of everything Palestinians have ever fought for: home.

Hundreds of thousands of Palestinians live in refugee camps, many elsewhere in the Middle East, often foregoing citizenship rights in that second country and passing on their statelessness to their children and grandchildren in the name of one thing. Home. No elected Palestinian government at this point is going to forget that and simply roll over just because some wannabe international peacemaker wants them to, for their career-boosting photo op in the Rose Garden. That’s been done already.

If any party other than Hamas were in power in Gaza right now, it might have tried to lobby for international support for the Palestinians of East Jerusalem a few days or weeks longer before launching rockets on Israel. But seeing its fellow countrymen and women made homeless, time and time again, would ultimately have forced the hand of even a non-Hamas government in Gaza, either drawing it into the fight or making it so unpopular for not getting involved that it’d be forced out of power. That’s why to focus on Hamas is to miss the point, and to reinforce the myth that the conflict is, in some fundamental manner, about the group. The conflict is about the Israeli occupation.

To focus on Hamas is also to sanitize the conflict, and in that way become complicit in it. It allows people to express sympathy for ordinary Palestinians while blaming a few people at the top of the Palestinian leadership. But the right to self-defense against Israel’s continued aggression belongs to all Palestinians; legitimate resistance cannot be a right only for those Palestinians who believe exclusively in nonviolent self-defense — not in the face of the violence we endure. We, Palestinians, are in this together.

For others to pretend that Israel is waging a war against Hamas, rather than against all Palestinians, is what allows the kinds of attacks and crimes of recent days to be repeated every few years.

And now, if the cease-fire does hold, the spectacular violence of the last two weeks will slip out of the news cycle as Palestinians go back to suffering, largely out of view, the slow-motion violence of Israel’s continued oppression — its blockade of Gaza, its militarization of the West Bank, more evictions of Palestinians.

As kids, one of our favorite games was “shuhada’a.” It was a bit like “doctors and nurses,” in that one kid had to just lie there, doing nothing. But “shuhada’a” means “martyrs,” and in our game, one of us would lie perfectly still in a pretend coffin while the others carried it around chanting “Filistin Hurra” (Free Palestine).

What do you expect from a people who are shot at, as kids, and given only a prison, or a camp, to live in as adults, instead of their home? It’s not complicated.

Basma Ghalayini is a translator from the Arabic and the editor of “Palestine +100: Stories from a Century after the Nakba.”