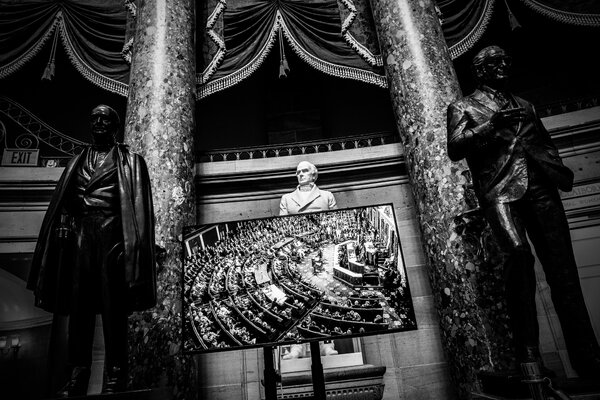 The party’s thoroughly embarrassing inability to choose a speaker of the House after multiple attempts is a crisis of its own creation. Since at least the Barack Obama years, the Republican Party has seen a strengthening of its right flanks, one whose mission was not to produce policy but to prevent progress, one whose tactic was destruction rather than diplomacy.

You could see the beginnings of the current iteration of this political extremism when John McCain picked the woefully unqualified Sarah Palin as his running mate in 2008. She wasn’t highbrow, but she was headstrong. She was the anti-Obama.

During her speech at the Republican National Convention in 2008, she said that she had learned that if “you’re not a member in good standing of the Washington elite, then some in the media consider a candidate unqualified for that reason alone.” But, she continued, “here’s a little news flash for all those reporters and commentators: I’m not going to Washington to seek their good opinion; I’m going to Washington to serve the people of this country.”

Palin exposed a dangerous reality about the Republican base: that it was starving for disruption and spectacle, that it would cheer for anyone who annoyed liberals, that performance was far more important than competence.

Like a virus evolving variants, the Palin fervor channeled itself into the Tea Party movement, which evolved into the Freedom Caucus and manifested among voters as Trumpism.

The party establishment chose to ignore those on the fringe, figuring that the energy they generated could be beneficial, and any damage they did could be mitigated. In any event, they were only a fraction of the members and could always be outvoted.

They began to exert that power. The Freedom Caucus essentially forced the Republican speaker of the House, John Boehner, to resign in 2015 because its members felt he wasn’t forceful enough against Obama. Representative Peter King reportedly said, “To me, this is a victory for the crazies.”

But those “crazies” were far from finished. They refused to support Kevin McCarthy for the speakership then because he was Boehner’s No. 2 and because Republicans were fuming that he slipped and told the truth about the Benghazi investigation: that it was a political witch hunt designed to hurt Hillary Clinton’s presidential prospects.

Some of that old disdain for McCarthy has no doubt lingered and is being manifested in this week’s failed votes to make him speaker.

Donald Trump became Exhibit A for the synergy of fame, power and influence the Republican base craves when he broke through the establishment firewall in 2016 and gave his supporters what they wanted: an unbridled political anarchist, an unapologetic white nationalist.

During the Trump era, the Marjorie Taylor Greenes of the party became rock stars among the base, even if they were jokes among their colleagues. Their success has made the term “fringe” a poor way to describe them. In many ways, they are the Republican Party.

All the while, too few mainstream Republicans objected to their antics and offenses. Paul Ryan, who became speaker in 2015 when the Freedom Caucus made it clear that its members wouldn’t support McCarthy, knew Trump was a problem but said little to push back against him until Ryan left office.

As Tim Alberta reported in Politico Magazine in 2019, Ryan made the conscious decision when he was speaker not to “scold” Trump but to “help the institutions survive,” to “build up the country’s antibodies” and put “the guardrails up.” He wanted, he said, “to drive the car down the middle of the road” without letting it “go off into the ditch.”

Ryan, like many other mainstream Republicans, thought that by biting his tongue, putting his head down, and doing his best to work with Trump and do his job, he was protecting the country.

But that silence read as acceptance, not only of Trump but also of the burn-it-all-down members of the party in Congress. Now, that group has grown strong enough to prevent a House speaker from being elected on the first ballot for the first time in 100 years.

And they are getting precisely what they want: more headlines, more airtime, more spectacle and therefore more power.

They aren’t interested in governing, but rather in teasing the growing urge among the Republican base to throw a wrench in the gears.