Opinion | How to Love the Olympics Despite … Everything

Growing up in the 1990s, I didn’t have photos of movie stars on my bedroom wall — I had Joan Benoit Samuelson. Sprinting to victory at the first women’s Olympic marathon, she looked confident and joyful and tough. I read about the sprinter Wilma Rudolph, the 20th child of a Tennessee railroad porter. She wore metal leg braces as a girl but grew up to be an Olympic champion; I taped her photo to my wall, too. Later I watched a number of champions on my television: Venus Williams in tennis, Jackie Joyner-Kersee in track, Misty Hyman in swimming. All perfect additions to my wall.

To me they were heroes. They showed that you could win and be proud of it. They were Olympians.

Then I learned about what really went on around the Olympics. Children were assaulted by their gymnastic team’s doctor. Champions were fueled by drugs instead of grit. Officials enriched themselves while athletes toiled. Actual villages were displaced for Olympic ones. The Games started to feel like little more than a national branding exercise — and a costly distraction from our long list of crises.

This year there’s even more to criticize. Tokyo is shaping up to be an angry Olympics, and with good reason: corporate greed, climate decay, racial inequity and the risk that holding the Games during a still-raging pandemic will make them a superspreader event.

Some have said they’ve lost their enthusiasm for watching the Games. Toyota, a major sponsor, has pulled its commercials that were to run in Japan. (No one has the option of boycotting the Games in person, as earlier this month spectators were banned from most events.) Amid a spike in Covid-19 cases, the Japanese public overwhelmingly disapproves of holding the event (and nearly half of Americans agree). Already athletes have tested positive for the coronavirus, with some teams isolating after exposures. Meanwhile, we have witnessed outcries over whether Olympic rules treat all athletes fairly, including a series of scandals around swim caps that don’t accommodate Black hair, and the exclusion of African sprinters with naturally high testosterone levels from some races.

What has been sold as a moment of global unity and celebration of human achievement now feels as rotten as everything else. Is it possible to still watch in good faith? Or is this another broken institution we need to burn down?

I Used the Podium to Protest. The Olympic Committee Punished Me.

The I.O.C. is on the wrong side of history, again.

What does it take to be an Olympian? “He’s a double Olympic champion!” Strength. “So Gwen Berry steps up.” Perseverance. “A new meet record.” Belief. “She came here ranked world No. 2.” I’m one of the best hammer throwers of all time. And I’m proud to be a U.S. Olympian. But you want to know what I think about racial injustice in America? It’s ——” [BLEEP] The Olympic Charter has a rule that bans athletes from protesting at the Olympic Games. If we protest, they punish us. That’s what happened to me. So last summer, at the Pan American Games, I threw 74 meters and I won gold. [CHEERS] I remember the medal was so heavy and so real. I was excited. I was nervous. [MUSIC PLAYING – ‘THE STAR SPANGLED BANNER’] In that moment, when the national anthem was playing, I knew that that national anthem did not speak for people like me in America. The freedom, liberty, and justice for all—it is not for Black people. Something came over me. I raised my fist. I felt like I was not at peace with myself if I had not said something or did something in that moment. “Hammer throw gold medalist Gwen Berry raised her fist—” “—raising her fist—” “—raised a fist to protest social injustice.” This is my letter. ‘Dear Gwen, this letter will serve as a formal reprimand from the United States Olympic and Paralympic Committee. Additionally, the U.S.O.P.C. considers you to be in a probationary period for the next 12 months.’ Now, I don’t know about you guys, but that does not make sense to me. So Rule 50 is a rule in the Olympic Charter that states that athletes cannot demonstrate any type of political, religious or racial propaganda in the field of play or on the podium at the Olympic Games. Raise a fist or take a knee? It’s not allowed. Here are the I.O.C. board members who are enforcing the rule. So the idea of white people telling Black people exactly what they can and cannot say or do is exactly why I protested. The I.O.C.‘s logic behind Rule 50 is to make sure everybody comes together. Everybody is kumbaya. Let’s just stick to sports. It’s ridiculous because there is no such thing as just sticking to sports. Every Olympic athlete has fought for something or believes in something. Of course we can protest outside the Olympic Village. But who will see that? No one. The whole world sees when we protest on the podium. I did something when it was not popular. I did it because, genuinely, this is how I feel. Genuinely, this is how I lived my life. And I’m tired of it. The Olympic Committee is on the wrong side of history, but not for the first time. During the 1968 Olympic Games, John Carlos and Tommie Smith raised their Black fists in the air. Just like me, they were punished. “And now, on November 1st, that same committee will be inducting these two men into the U.S. Olympic and Paralympic Hall of Fame. I guess better late than never, huh?” It’s hypocritical. The International Olympic Committee— they love the stories. They want to pitch, oh, well, this athlete grew up without a father, or this athlete grew up in the ghettos. This athlete had to go without food for months and months. But as soon as the athlete is the best athlete in the world, they say, oh, no, you can’t talk about racial discrimination in Black and brown neighborhoods. Oh, that’s not for you to talk about. But that athlete is literally a product of the system. It’s hypocritical because here I am— a Black, broke woman— saying that what they are doing to other Black people is wrong. And I was punished for it. I was disgusted. I just couldn’t believe it. “We, the National Football League, admit we were wrong for not listening to N.F.L. players earlier and encourage all to speak out and peacefully protest.” Other sporting bodies are finally confronting their past and allowing players to protest. “Major League Baseball players spent Opening Day sending a message— Black Lives Matter.” “NASCAR banning the display of Confederate flags at all events—” Thomas Bach, I know you want to keep the Olympics a place of harmony and focus solely on sports. You demand athletes like me to push past our limits and strive for excellence. It’s time for you to do the same. You need to get rid of Rule 50 and come up with something else. Standing up for what you believe, pushing for impossible dreams— that is the Olympic spirit. I’m ready for Tokyo 2021 and my next podium. And when I get there, I want to be able to raise my fist and my voice without being punished. 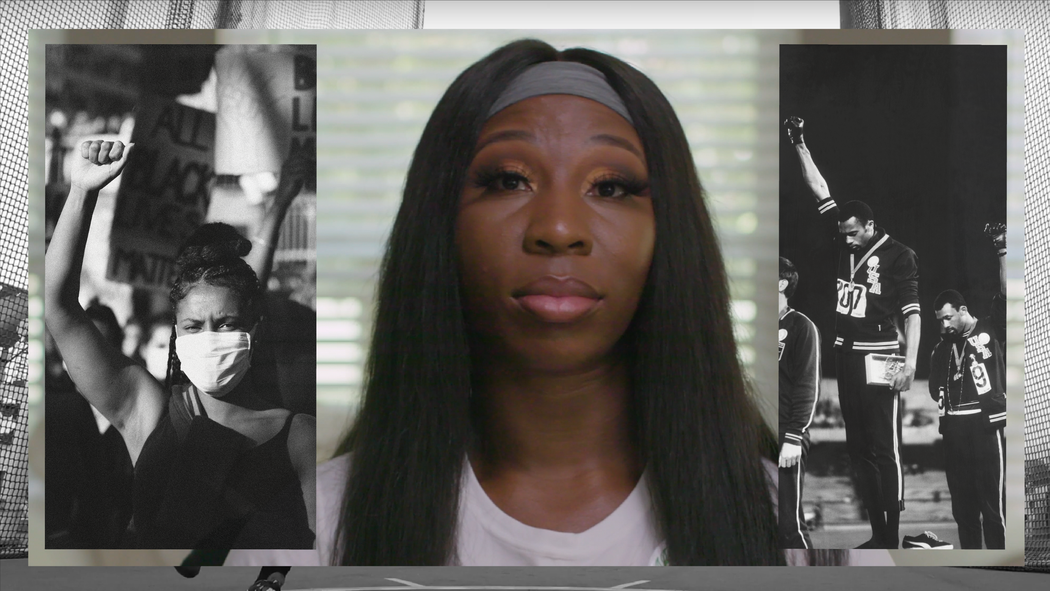 I think there’s still a way to enjoy the Olympics this year — and even to love them. The appeal of the Games has never really been the Olympics as an institution; it’s the Olympians themselves. And since I was a kid putting their photos on my walls, the Olympians haven’t really changed. These athletes still showcase extraordinary human achievement from around the world. This year’s roster is as excellent as ever. Watching them makes you hope.

That was clear to me as I watched the U.S. Olympic Trials last month, when athletes competed for spots on the national teams. I was as exhausted by the pandemic and numbed by the litany of Olympic problems as anyone else, but as I watched Simone Biles teach gravity a lesson and Sha’Carri Richardson outsprint her competition, ambivalence dissolved.

The track was so hot that athletes could barely take it. Still, the excitement was infectious, the athleticism thrilling. Watching the face of someone in the seconds when she qualifies for the Olympics is witnessing what may very well be the highlight of her life. Your body strains along with her as she leans for the finish. It’s hard not to feel vicariously energized.

And it’s OK to need that right now.

We don’t have many ways left in our culture to be collectively inspired. After more than a year of lockdown, tragedy and uncertainty, watching athletes achieve their dreams despite all the challenges felt like one.

Even watching athletes’ disappointments was somehow motivating. After she failed to qualify for the Olympics in the 100-meter freestyle, the swimmer Simone Manuel talked about grappling with burnout and depression. Her experience was profoundly relatable, even if you are not among the fastest swimmers in the country. For a moment, she was fallible like the rest of us. Then, incredibly, she made it onto the team for the 50-meter freestyle race, in her last shot.

I’m tired of being cynical about everything. I read every day about how the ship I’m on is sinking, and right now I want to hear the band. This year I will eat it all up and watch Olympians push through adversity and pain to triumph. In such a broken time, there’s a particular salve that these triumphs offer, an example to spur us forward. After qualifying for her fifth Olympics, Allyson Felix brought her daughter out on the track to celebrate, making working parents cheer. Gabby Thomas discovered a tumor on her liver earlier this year (it turned out to be benign). After I watched her win the 200-meter dash at the trials, in the second-fastest American time ever, I figured maybe I could get my act together to make it to the office next month.

We can, and should, be critical of the Olympics as an institution while still appreciating the achievements of Olympians themselves. Like all of us, they are caught up in systems they didn’t create. Yes, there are lies, abuses and failures — but the talent and hard work are real.

There are plenty of good suggestions for how to change the Olympics, and we should push for them. It starts at the top — with leadership that puts the focus back on sports. Fixing the Games will take pressure from fans, sponsors, athletes and nations themselves.

Regardless, fixing the Games won’t fix our bigger problems. For now, we have Tokyo.

You don’t have to be a kid to get a thrill out of people doing impossible things. The Olympics aren’t perfect, and neither are the Olympians. But they are showing they can endure. Maybe we can, too.

Why Do You Watch the Olympics?

Lindsay Crouse (@lindsaycrouse) is a writer and producer in Opinion. She produced the Emmy-nominated Opinion Video series “Equal Play,” which brought widespread reform to women’s sports.